Joint Negotiating Committee – APFA Attorney Roger Pollak –
“What if the Contract Ends Up in Arbitration?” (Video)

Roger Pollak, one of the attorneys charged with presenting the arbitration on behalf of APFA, explains the arbitration process in the event the T/A is not ratified, including the power of the arbitrators who are bound by law to follow the Negotiations Protocol Agreement (NPA). (video) 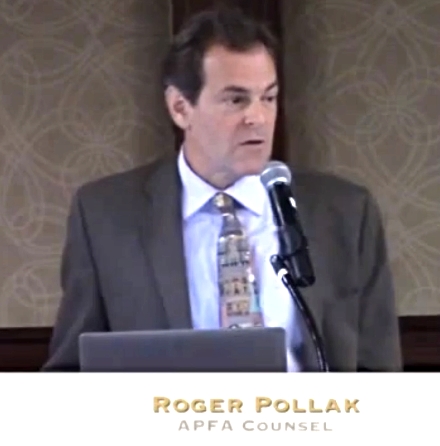 The NPA states that if a T/A is not reached or if it is rejected, the parties will utilize mediation while awaiting arbitration.

There are rumors circulating that if the T/A is rejected, somehow the T/A will be improved upon in mediation. That is false. No improvements will be made in mediation and here’s why:

1. In accordance with the APFA Constitution, any meaningful change reached after the rejection of a T/A – outside of narrowing the issues for arbitration – would require another vote. The NPA does not provide for a second balloting period, nor would management wait for one.

2. All of the other work groups on the property are waiting to negotiate their joint contracts. The company will not send a signal to the other unions that they can vote down their first T/A and come back to the table for more.

3. The current LUS contract was ratified after the US Airways Flight Attendants rejected two previous T/As. The current LUS CBA has the same value as the first two T/As that were rejected; the only change was where that same value was allocated in the contract. This speaks to current management’s approach to bargaining as a result of their experience with protracted negotiations.

For all of these reasons, there simply is no path to securing a contract that is worth more than the T/A.