LAA
Location Delay Incentive and Last Five (5) Days
Currently, LAA Flight Attendants are still covered by the CLA’s Bid Line Guarantee and the Last 5 Days (L5D) pay protection provisions. JCBA pay protections will be implemented as soon as practicable; and, it has been identified as a priority for the Joint Scheduling Implementation Committee.

However, a couple of the JCBA’s scheduling-related provisions have already been implemented, such as the Location Delay Incentive (LDI) pay (Sec.14.M.7.).

When the JCBA pay protections are implemented, LAA Flight Attendants will receive the greater of LDI pay or pay protection pay provided through Illegal Through No Fault, Last Trip of the Month or Crew Substitution in accordance with Sec.14.M.7. of the JCBA.

Section 3 – Compensation
Purser, Lead, Aft, Galley and Speaker will be paid at scheduled or actual, whichever is greater.
LAA: May 2, 2015
LUS: Status Quo

Section 4.A.4. – Per Diem for In Base Training
Flight Attendants awarded or assigned training at their home base shall be paid per diem for all actual hours in training.
LAA: May 2, 2015
LUS: Status Quo

Section 9 – Sick Cap Removed and Trips Eligible for Sick Pay
Sick pay will no longer be limited to 80/85 hours. In addition, all trips will be eligible for sick pay, except for Sick Make Up trips.
LAA: May 2, 2015
LUS: Status Quo

Section 25.N. – Sick and Vacation Accrual While on a Bid Leave/VLOA
Flight Attendants will be eligible to accrue sick and vacation while on a bid leave/VLOA, regardless of the duration of such leave.
LAA: May 2, 2015
LUS: Status Quo

Section 29.E. – Training Pay
Flight Attendants will be paid seventy-five dollars ($75) training pay for each day of recurrent and non-recurrent training. Other compensation will also be implemented for Distance Learning as well as the inability to attend training due to flight cancellations or delays.
LAA: May 2, 2015
LUS: Status Quo

LAA
Travel Day Requests for a Vacancy Transfer
The JCBA’s travel preferences associated with vacancy transfers were implemented on January 1, 2015. Here are some highlights of this new provision:

For more information, please refer to the Travel and Relocation Procedures webpage of the Crew Resources section of the Flight Service website.

LUS
Swapping of Positions Entries in New ACARS Software
There has been some confusion concerning Flight Attendant position swap entries in the new pilot ACARS system. If Flight Attendants swap positions on a sequence, pilots can make the necessary adjustments in ACARS, so that the appropriate Flight Attendants receive any premium pay associated with their new position. A memo was sent to all pilots informing them of the new procedures on how to make the adjustments. If you have any issues, please contact your Flight Service Manager.

Click here to read the memo that was sent to the pilots regarding this issue.

LAA
Vacation/Sick Accrual Eligibility on Bid Leave
The JNC is pleased to announce that another benefit of Voluntary Leaves of Absence (VLOA), which will be applicable to LAA Flight Attendants on January 1, 2016, will be implemented sooner for LAA Bid Leaves. Effective May 2, 2015, LAA Flight Attendants taking Bid Leaves (BL), such that they are not active 15 days of the month, will be eligible to accrue Vacation and Sick for that month. This eligibility for Vacation and Sick accrual will apply on a prospective basis beginning May 2, 2015. In order for these months to actually accrue Vacation and Sick in 2015, the Flight Attendant must have been paid an average of 35 hours for each active month during 2015. 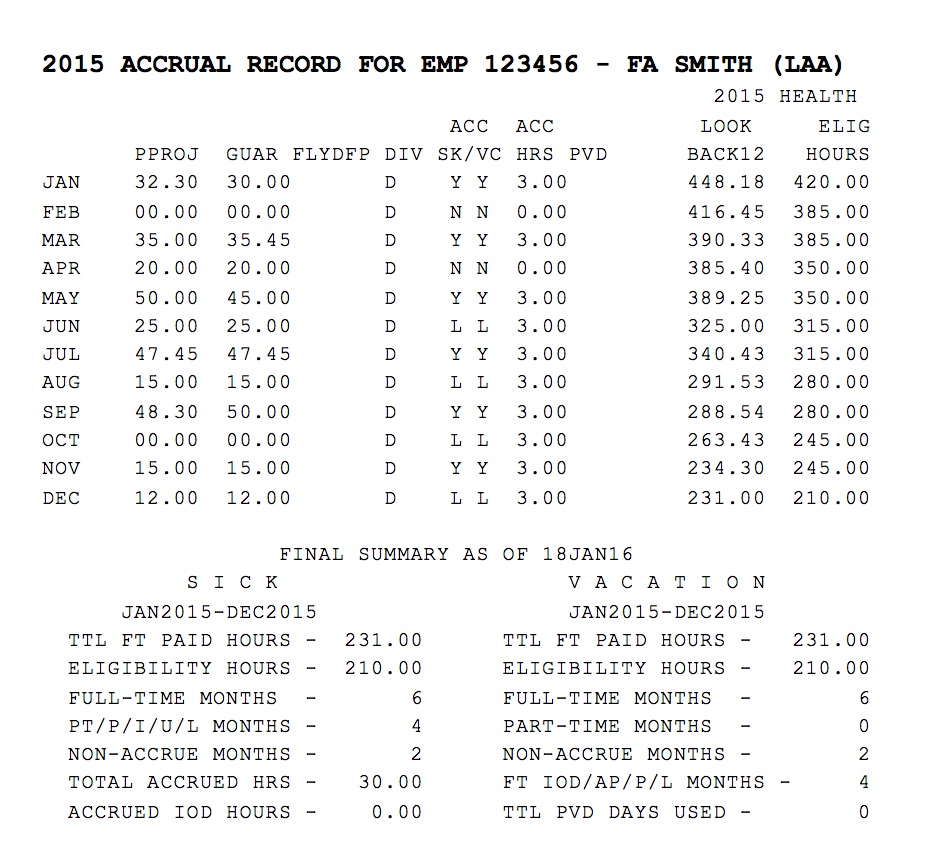 The example above is of a Flight Attendant who takes 20-day Bid Leaves (BL) every other month. Prior to May 2015, the months of FEB and APR were not eligible for VC or SK accrual as the Flight Attendant was not active for 15 days in each month. The VC and SK accrual columns reflect an N, and the threshold was reduced by 35 hours for each month.

Beginning May 2015, the Bid Leave months are indicated with an L, which means they are eligible to accrue VC and SK, provided the Flight Attendant meets their threshold in the other active months indicated with a Y.  The threshold is also reduced by 35 hours for each of the BL months after May 2015 (JUN, AUG, OCT and DEC).

Note: Only paid hours in a Y month count toward meeting the threshold based on the number of Y months for the calendar year.