1 for 2 – duty day starts with report time, ends with check-out. Then divide hours by 2 equals your minimum pay for the day.

The change will occur in accordance with the Joint Collective Bargaining Agreement (JCBA) and the APFA/AA JCBA Implementation Schedule on August 1, 2015.  Noted below are two examples showing the increased value of a Pairing using the new Duty Rig.

The application of the new Duty Rig increased the value of this Pairing by 17 minutes.

A direct comparison of this Pairing to an identical Pairing from July is not possible because the Pairings change from month to month.  Math tells the story:

The CATCREW Hours and Minutes calculator shows the calculations below. 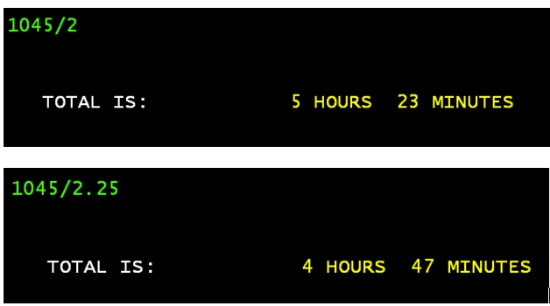 The application of the new Duty Rig increased the Total Credit Value of this Pairing by 36 minutes.

Certain times have been adjusted to an earlier start time by 15 minutes to accommodate a Reserve Flight Attendant wishing to bid an earlier Reserve Availability Period (RAP) the next day.

For Example: Prior to the upcoming changes, a Reserve was on the 1600 – 2000 OPR shift.  Once the shift was completed, the Reserve would start a 10-hour rest period, which is completed at 06:01. If the Reserve had bid for RAP B (0600 – 1800) the following day, they would not be awarded this RAP due to the system looking for a complete 12-hour RAP for assignment. Consequently in this scenario the system would assign RAP C (1400 – 0200) instead.

The upcoming changes are especially useful for those Reserves going off duty the day following this RAP assignment. If assigned RAP C, the Reserve would be available to the company until 23:59 going into days free from duty.

Please note: DCA will not have any OPR time slot changes.

The PHX domicile will also experience a complete time change on their last OPR of the day. The new times for this OPR shift will be 2100 – 0100. This new time will replace the previous 20:00 – 00:00 shift. The Company informed APFA that the reason for this change in PHX is to protect the operation on the last bank of departures.

APFA will continue to push for improvements to the Reserve system.