Every month, there are questions related to the PBS Awards and why it awarded one pairing versus another pairing. There has been a decrease in these questions over the last few months, which leads us to believe that the knowledge and understanding of how/why is growing. It is inevitable that there will continue to be questions for a long time.

The topic of mis-awards comes up every month and as we have pointed out in previous Weekly Updates, there are generally a few mis-awards each month due to a variety of reasons. The number of actual mis-awards has decreased each month as the errors that cause a mis-award are found and corrected. With every mis-award, the vendor finds what caused the problem and they create a fix that means the problem will not happen in the future. So, mis-awards are very valuable in bringing errors to light and ensure they do not happen again.

In the end, this month there were less than 20 legitimate mis-awards out of a total of 7,766 bids, which represents 0.0026%. Ultimately, it would be wonderful to see zero mis-awards but as with any technology, it is probably unrealistic to think that is possible.

If you would like to make sure that you are not awarded any co-terminal pairings, you can include the Co-Terminal Airport Pairing Property-DCA in all layers of your bid to prevent PBS from considering the IAD pairings.

Tip of the Week: Multiple Pairing vs Double Up

These two terms both mean that there are two pairings that touch the same calendar day BUT they describe two very different instances.

It is a cumulative property in PBS. This means that if it is included in Layer 1 but not in your subsequent layers, PBS still awards based on being allowed to award Multiple Pairings in all layers. If you only want Multiple Pairings to be considered as a last choice, only include it in Layer 7.

It can ONLY be bid for specific days (Double-up on date). It is possible to bid for double-ups on every day of the month, if you so choose. 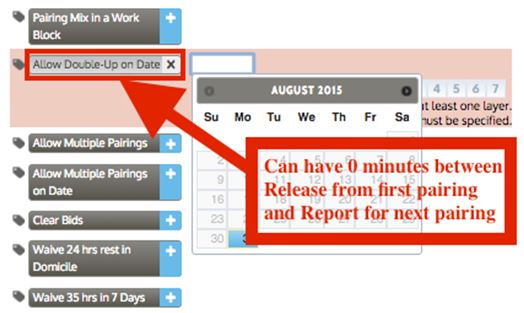 There was an issue with the filler days for October, so they are not being awarded until 28AUG. Due to this delay the VEX submission window for October will be extended until 03SEP. This may affect some display issues with the TBS award, but will not affect the bid results.

If you have 7 or more consecutive days of Vacation in October, you may elect to choose 4 days before, after or split on either side of your vacation days. VEX days hold no pay or credit and basically are just a pre-planned day OFF. This is a contractually allowed benefit and is not subject to denial or seniority.

The PBS logic allows the awarding of pairings from both IAD and DCA domiciles in the same award if a calendar day exists between the respective report times at each airport unless the waiver is included in the bid. What this means is if you did not bid pairings at both airports, you may still be assigned both IAD and DCA pairings due to seniority or necessary coverage.

If you would like to make sure that you are not awarded any co-terminal pairings, you can include the Co-Terminal Airport Pairing Property-DCA in all layers of your bid to prevent PBS from considering the IAD pairings. If PBS has to go outside your layers to finish your award, IAD pairings may be assigned due to coverage needs. As with any other pairing type, if the coverage is necessary, you may be assigned that pairing type. The best way to avoid this, is to ensure that you have an substantial number of pairings and available days in your bid so that PBS does not have to go outside your layers.

If you have not been added to the Tips from the JIRC Facebook page and would like to be, please email JIRC3@apfa.org with the Subject Line “Add to Facebook” and we will send you an invitation.

About the JIRC:
The Joint Implementation Resolution Committee (JIRC) is a committee that was created by the current contract (the Redbook) to oversee the implementation of PBS.