In our last update, we put forth some pretty staggering statistics to illustrate the magnitude of the work that’s underway to implement the JCBA. We’ve been meeting weekly to prioritize those projects. We also have a new addition to the JSIC.

Alin Boswell, PHL-based flight attendant and APFA Negotiator officially joined the team earlier this month – replacing Mike Flores who will continue supporting us in a part-time role. He began his career with US Airways back in 1989 and held various union positions representing flight attendants.

Your contract, your priorities

Flight Attendants have told us that pay protection is a top priority – which is why following the implementation of the many economic items, our focus now shifts to implementing this subsection of the contract as quickly as possible, while getting it right. Pay protection is tied to several other components including procedures for rescheduling, “illegal through no fault”,  last sequence/series of sequences in the month, sequence splits and home-base rest to name a few.

A quick disclaimer: The below is meant to provide a high level “30,000 foot” overview of how pay protection and rescheduling will work. The summary does not cover all possible situations, is not as comprehensive as the text of the JCBA itself, and should not be construed as the primary reference for Section10.  The JCBA is the governing document.

Rescheduled means any and all deviations from a flight attendant’s awarded sequence, as originally published, with certain exceptions.

There are different “rules” when it comes to rescheduling and pay protection. Which rules are applied depend on whether the reschedule occurs:

Exceptions to rescheduling include: cancellations where you’re not required to work a different sequence, deadheading to get into position because of a canceled flight, diversions (for fuel, weather, or emergencies), and departure and arrival delays.

Additionally, there are separate procedures that apply when a substitution of equipment occurs, as well as when a flight attendant becomes “illegal (to originate or terminate a trip) through no fault” of their own.

Under the JCBA, if you’re illegal (through no fault of your own) to originate a trip sequence, in order to be pay protected, you’ll have the option of splitting back on to the sequence at the point it passes back through your crew base or “rejoining your trip already in progress” at the point you become legal. Provided you were FAR illegal to originate the trip, you’ll be pay protected for any portion(s) of the trip flown by a substitute crew. Please note that under the JCBA, to be eligible for pay protection, you may be required to waive your contractual rest period to the FAR minimum.

Likewise, if you were legal to originate a trip sequence, but become illegal to complete it, you’ll be split off the trip at the latest point the trip passes through your crew base or at the point you become illegal. You’ll be pay protected for any portion(s) of your trip flown by a substitute crew.

And finally, there are protections that kick in if a lineholder’s last sequence or series of sequences of the month is canceled.

These procedures, as well as the pay protections applicable to each scenario are outlined in Section 10.J.K. and L. of the JCBA.

We’ve already met with Crew Schedule and IT to thoroughly map out process flow diagrams for various scenarios that might trigger pay protection.

What’s next? We’ll be submitting business requirements documents to our IT partners so they can begin the necessary work to develop estimates on the effort involved to develop the automation necessary to support these provisions. We know many flight attendants are anxious for more details and we’ll keep you posted as the time-frame on implementing this becomes clearer.

In our next communication, we’ll tell you about the items being implemented January 1, 2016.

As airline employees, we love our acronyms. In keeping with that tradition, the JCBA introduces some new ones into our vocabulary. We’ve outlined a few of them below and provided a brief explanation of what they mean and how they might affect you. 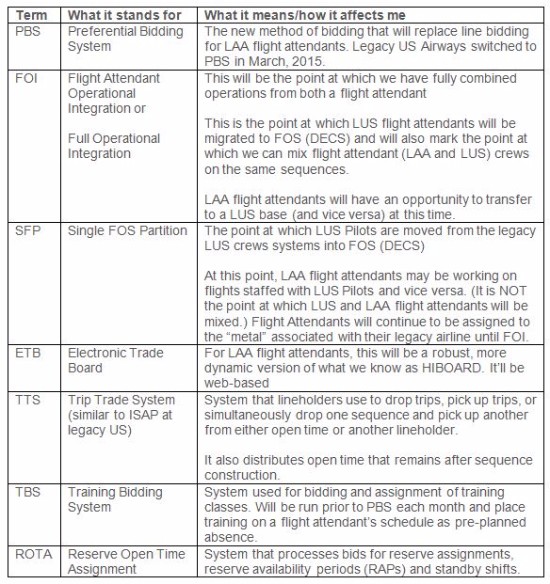 We’ll keep you updated on our progress via email and we’ll also post in the Crew Connections page on Jetnet as well as the APFA website.