The January 2016 targeted Lineholder and Reserve numbers have been loaded into the PBS dashboard. Once again, APFA is extremely disappointed and frustrated that the Company has chosen to keep the Reserve coverage extremely high in all four LUS bases. On average, the Reserve numbers are slightly higher than last January’s numbers, and we were not under the PBS system at that time. The Company is basing its Reserve headcount for the entire January bid month on the first five critical travel days of January.

APFA strongly advocated for our Reserve Flight Attendants by providing alternatives and solutions to prevent high Reserve counts for the January 2016 bid. Your LUS Base Presidents and APFA Representatives carried the message that a disaster was looming if the projected numbers were held to what the Company posted. Some of the solutions by APFA included:

Here are the January 2016 projected counts for Lineholders and Reserves: 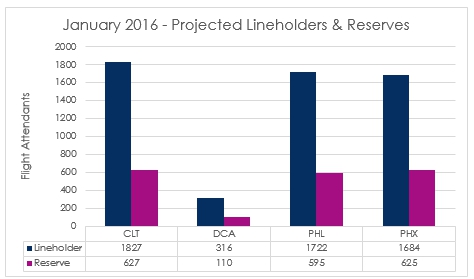 These are the January 2016 projected line averages:

The Company is convinced that their calculations are correct and based on historical data; we are not. How can the Company continue using historical LUS scheduling data when the PHX-Based Flight Attendants were working under a completely different Contract and Scheduling system (1999 AWA Agreement) than the CLT, DCA and PHL-Based Flight Attendants in January of this year? On average, over twenty-five percent of our workforce continues to be pushed to Reserve positions month after month.

We continue to see, more often than not, high line averages forced upon crewmembers, causing fatigue which leads to downtime. While the line average has been reduced in comparison to other PBS bidding months, the Reserve headcount continues to defy what PBS promised. We will not stop until the Company gets this right. Your APFA Leadership will continue to press the Company on the PBS system and the upcoming January PBS bid, and will keep you updated on any changes. APFA National President Marcus Gluth will be filing a Presidential Grievance on this matter.

Your APFA LUS Base Leadership