The January 2016 System Seniority Roster has been published and posted on Wings, the AA Flight Service website, and on the Contract Page at APFA.org.

Flight Attendant shall have thirty (30) days after the posting of such list in which to protest in writing to the Company any alleged omission or incorrect posting affecting her/his seniority on any such revised list, but such protest shall be confined strictly to error or change occurring subsequent to the posting of the prior System Seniority List.

When a Flight Attendant is on vacation or an authorized leave of absence, e.g., medical, maternity, adoption, educational, sick leave, jury duty, etc., at the time the above list is posted, such Flight Attendant may protest any alleged omission or incorrect posting within thirty (30) days after her/his return to duty.

Flight Attendant Counts by Base – LAA/LUS

Seniority Date Range by Base – LAA/LUS 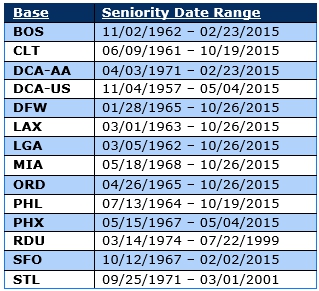 The Willingness to Serve (WTS) for Executive Committee Member Ad Hoc Place #3 and #4 can be found by clicking here and on the Elections page of the APFA Website. The term of office for these positions commence on April 1, 2016 and end March 31, 2019. If interested, please return your WTS to the APFA National Secretary, 1004 West Euless Blvd. Euless, TX. 76040 anytime prior to the Annual Convention that convenes on March 9, 2016 in Phoenix, Arizona.

APFA is now accepting resumes for the following positions:

Regional Representative and National Department Chairs commence on May 1, 2016 for a two-year term ending on April 30, 2018. National Balloting Committee and National Budget Committee terms begin April 1, 2016 for a two year term ending March 31, 2018. Information on the positions and their duties can be found in the APFA Constitution and the APFA Policy Manual on APFA.org. If interested, please send your resume to the APFA National Secretary, 1004 West Euless Blvd. Euless, TX 76040 any time prior to the Annual Convention that convenes on March 9, 2016 in Phoenix, Arizona.