Moments ago, American Airlines CEO Doug Parker and President Scott Kirby announced a six (6) percent pay raise for Flight Attendants effective April 1, 2016. This adjustment places our workgroup’s wages higher than our counterparts at Delta, and above the United/Continental Flight Attendants which still do not have a joint Contract. 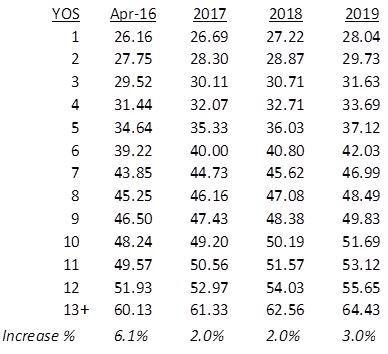 APFA National President Marcus Gluth welcomed the news on behalf of the workgroup: “I am happy to see that Management is finally recognizing everything Flight Attendants do to make American Airlines successful. We work very hard to make our Company the best in the world and we deserve to be compensated accordingly. Things have been difficult for Flight Attendants since the merger, there have been lots of changes and hang-ups, and we have been extremely patient. I am pleased to see our Company reward our hard work.”

Bob Ross, who will assume the office of APFA National President next Friday, also welcomed the progress: “This is definitely a step in the right direction. I am pleased to see Management is assigning value to employee morale. I look forward to building on this progress in my administration.”