On Wednesday, North Carolina Governor Pat McCrory signed a bill that bars cities and towns from creating their own rules prohibiting discrimination based on sexual orientation and gender identity. Individuals will instead be forced to use the restrooms of their birth gender. The law not only overturns Charlotte’s ordinance that would have protected transgender individuals who use restrooms aligned with their gender identity, but it also prevents all cities and counties from passing their own anti-discrimination rules and establishes a statewide nondiscrimination ordinance protecting people on the basis of race, religion, national origin, color and biological sex.

“APFA has a long tradition of accepting and embracing all people. We fight for the rights of our members in many different areas. With over 2800 Flight Attendants based in Charlotte and Raleigh-Durham combined, our workgroup represents a diverse group of people in the state of North Carolina. We condemn, in the strongest possible terms, any attempt to discriminate based on sexual orientation or gender identity, and any laws that permit such practices. We are hopeful that American Airlines will use its considerable influence as the largest airline in North Carolina to reverse this discriminatory legislation.” 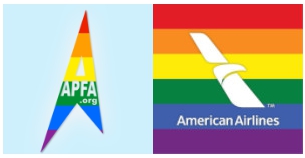 Today is Good Friday. In observance of the UAW Office Staff Holiday, the APFA Headquarters is closed. The office will reopen at 09:00am (CDT) on Monday, March 28.