PBS bidding for the July 2016 bid month closes tomorrow at 12:00 PM (EDT) / 9:00 AM (MST). Below are a few reminders when completing your PBS bid. More PBS bidding guidelines can be found in the Crew Portal Guide available on Wings.

Example 3 – Partial Line Together: Seniority #10 is the group Initiator and wishes to be in a group with number #20 and #30. The optimizer will take the bid of #10 and use it as the group bid. It will award #10 first at #28 seniority level. Then it will award #20 at the next seniority. It will try to build a complete Line based on the group bids. If PBS runs out of group Pairings to complete the Line, it will reprocess #10’s bids to fill the remainder of the Line with Pairings from #10’s subsequent Layers.

Bidding an On Date Property (Preference) will not put Red Eye’s or ODAN’s into your pairing pools.

Examples of On Date Properties: 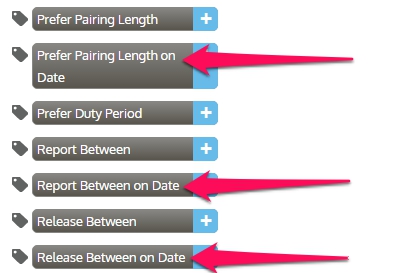 1. A Must-Off day(s) may be bid at any seniority level. Use the Reserve Calendar to determine likelihood of being awarded the requested day(s) off.

2. PBS must be able to satisfy ALL Must-Off days in order to award from that layer.

3. The first reserve layer should contain the most desired days off.

4. Bidding more than 11 Must Off days in a Layer will void that Layer, and PBS will move to the next Layer.

6. There are 3 factors determining how Golden Days are awarded:

Note: A Lineholder bidding Reserve with a Must Off in every Reserve Layer that cannot be honored will be awarded a regular line.

1. A Prefer-Off day does not set any conditions for being awarded a Reserve Line.

2. Prefer-Off days are similar to a Day Off wish list.

3. PBS will award all, some, or NONE of the Prefer-Off days requested.

This Property enables a user to bid for a desired range of credit. Selecting the field will display two boxes in which the Minimum and Maximum credit range may be entered. The following are important points to note regarding the Target Credit Range function when bidding:

NOTE: If you use the same TCR range through all layers but PBS cannot award in that range, it may be forced to go outside your layers to use the default range. Once outside the last layer, your pairing and line properties may no longer be considered.