Pairing Rig (1 for 3.50): A Flight Attendant shall be credited with one (1) hour for each three (3) hours and thirty (30) minutes on duty, from report of the pairing until release of the pairing. 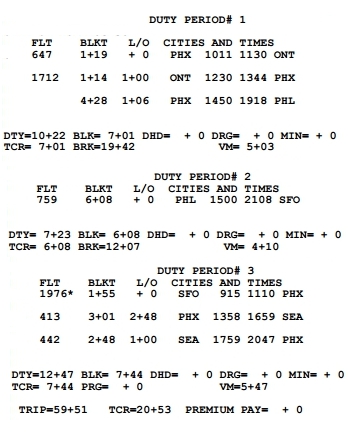 Due to a mechanical issue, Flights 413 PHX-SEA and 442 SEA-PHX cancelled.

In this example, the Flight Attendants are advised to complete a Direct Connect – Pay Claims Form, and claim the Variable Minimum Credit of 5:47 for Duty Period #3, since the VM is greater than the credit actually worked for the day and the Pairing Rigs.

Position Selection continues to be governed by the language in the 2013 Red Book Contract in Section 10, pages 10-51 through 10-53. A Flight Attendant who has been awarded her/his position through her/his PBS award is entitled to keep that position and cannot be displaced by a more senior Flight Attendant.

CLT, DCA, PHL or PHX-based Flight Attendants on CLT, DCA, or PHL pairings who are awarded a position outside of PBS in ISAP, ISAP/AIL, ETB, Reserve Assignment or swaps are considered “placeholders” on the Pairing. Actual Position Selection will be determined by seniority (or mutual consent) during the briefing prior to the origination of the Pairing per the Contract. 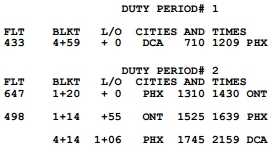 The Pairing above originates in DCA. At the beginning of the trip, Alex (AFA) and Chris (BFA) trade positions at the beginning of the pairing. Alex becomes the BFA and Chris becomes the AFA. The positions will not be changed by Scheduling on the pairing in CatCrew. To verify that a premium position trade was completed, check Menu Option # 3 in CATCREW. Look at the column to the right of the Base Column to verify the premium position is properly noted.

Alex (BFA) becomes ill on the PHX overnight and calls out sick. Gretchen, a PHX F/A is called out to replace Alex. Scheduling assigns Gretchen the AFA position, which was Alex’s original position before switching with Chris.

When Gretchen arrives to the aircraft, she is informed by Chris and Eve that the F/A’s changed positions at report in DCA. Gretchen now must work the BFA position, since she replacing Alex who switched positions with Chris.

As an exception to the above, CLT, DCA, PHL or PHX-based Flight Attendants on PHX pairings may not be displaced from her/his awarded or assigned position on her/his pairing regardless of how she/he acquired the position (e.g. PBS, ISAP, ISAP/AIL Reserve Assignment or swaps). This language can be found in the 2013 Red Book in Section 10, page 10-53.

At FOI through the Trip Trade System (TTS) process, the following language from the 2014 JCBA will be in effect:

A Lineholder who has been awarded a sequence may enter a bid or persistent bid in TTS to change to another position on the same sequence. A Lineholder may indicate her/his election to move such bid to the Unsuccessful Bidders List. Within a two (2) hour period prior to report, a request to move to a premium position will be accommodated on any particular sequence. The Reserve will be assigned the vacant position.

The Joint Scheduling Implementation Committee (JSIC) was able to reach an agreement with the company to give the Flight Attendants increased flexibility to manage your schedule. On a trial basis beginning the end of August, Lineholders will be eligible to drop/pickup pairings that originate in one month and terminate in the next via the Unsuccessful Bidders List (UBL).

Click Here for the rules and examples for the month to month processing. This trial period will be for the next 3 months, and if successful, will continue past the trial period.