Online tax return documents are now available on the ADP W-2 Services website for those who were already registered, or registered before December 31, 2016 for online W-2’s.

For those who didn’t opt for online access, hard copies of your W-2 form are being mailed. If you haven’t received your hard copy by next week, please contact American Airlines Payroll with any questions:

Last week, American Airlines reported a 2016 pre-tax profit of $5.1 billion and a net profit of $3.2 billion, excluding special charges. Doug Parker announced that this would bring the total profit sharing accrued for 2016 to $314 million.

What are eligible and ineligible earnings?

The LUS ODCG represents the current Contract language in place for LUS Flight Attendants, which includes portions still in effect from the 2013 Red Book Contract as well items implemented from the 2014 Joint Collective Bargaining Agreement (JCBA). The ODCG is available on the APFA website and on your Flight Attendant tablet. 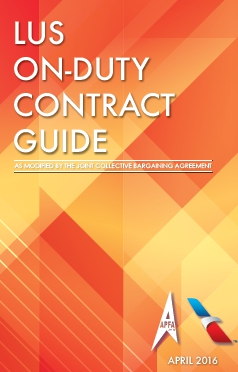 In Strength and Solidarity,