APFA and the Joint Scheduling Implementation Committee (JSIC) have been in talks with the Company to implement certain provisions of the 2014 Joint Collective Bargaining Agreement (JCBA). We are pleased to announce that these Contractual provisions will be implemented on the dates listed below for both LAA and LUS Flight Attendants. APFA National President Bob Ross signed a Letter of Agreement allowing four (4) LUS JCBA provisions (*) to be implemented prior to FOI. The chart below shows the new implementation dates in red. 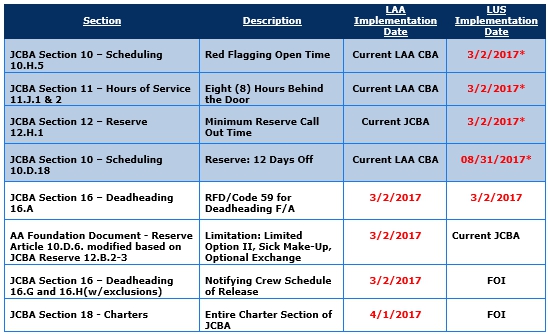 A Flight Attendant may exceed her/his monthly maximum to pick up a red flagged sequence.

When a Flight Attendant does not receive her/his minimum overnight rest period (eight (8) hours and twenty (20) minutes), she/he shall be considered on duty with all Duty Rigs and premiums applicable to continue on the sequence. A Flight Attendant who feels she/he cannot continue on the sequence shall be relieved at the earliest possible time without causing a delay and may claim sick time for the remainder of her/his sequence. It is also understood that a Flight Attendant who elects to be relieved in accordance with the above will not have that sick call recorded in her/his sick time totals.

A Reserve shall be required to report within two (2) hours from the time she/he is notified of a sequence by Crew Schedule. If a Reserve reports to the airport after check-in time for the sequence, she/he shall receive pay and credit for the sequence as if she/he had checked in for the sequence at the same time as the rest of the crew. As an exception, Reserve Flight Attendants at co-terminals shall be provided three (3) hours call out.

Reserves will have a minimum of twelve (12) scheduled days free of duty (“days off”) at her/his crew base each bid month. Eight (8) of such days shall be Golden Days and four (4) shall be Moveable/Flex Days.

A Flight Attendant required by the Company to deadhead shall receive full pay and credit based on scheduled block time or actual flight time, whichever is greater. Additionally, all premiums will apply to the deadhead.

Ready for Departure (RFD – ATC/ DEI/ RCD)/Code 59 is already paid only for working Crewmembers, with this implementation RFD will also apply to Deadheading Crewmembers.

Allows Reserves to pick up on all days off. However, since the JCBA Reserve Section is not yet ready to be implemented in full, the company has agreed to allow LAA Reserve Flight Attendants to pick up on more than six (6) days off in line with the JCBA provision. This will be a manual process for any trips picked up after four (4) duty free periods are used.

All other parameters continue to apply.

G.    DEADHEAD TO FIRST LIVE LEG OF A TRIP SEQUENCE

A Lineholder who is scheduled to deadhead on the first leg of a sequence may elect to be released from such deadhead and join the trip sequence at the first live leg.  A Flight Attendant electing this option shall:

1.    Notify Crew Schedule at least two (2) hours prior to scheduled departure of the deadhead;

2.    Notify Crew Schedule by telephone upon arrival at the downline station;

3.    A Flight Attendant choosing to waive a deadhead to a layover city must advise the Crew Hotel Desk as soon as possible if she/he needs the hotel room that was secured for her/him;

5.    Be ready to receive passengers on the first live leg according to the provisions of Hours of Service, Section 11;

6.    Be paid and credited for the deadhead as if the Flight Attendant had flown the original scheduled deadhead;

8.    Contact Crew Schedule as soon as possible when encountering any unanticipated delays which would affect her/his arrival at the downline station.

9.    A Reserve who has been released consistent with the parameters of Reserve Duty, Section 12, may utilize the provisions of Paragraph G.

10.    The provisions of Paragraph G will also be made available to commuters if the actual flying portion of the trip sequence begins in the Commuter’s Designated City, including SJU.

12.    A Flight Attendant at a co-terminal with a deadhead leg(s) at sequence origination may request to have the deadhead originate at a different co-terminal.  Such Flight Attendant should contact Crew Schedule as soon as possible to make such a request.  Reserves should contact Crew Schedule no later than the conclusion of the reserve call in window if the assignment was given prior to the end of the call in window.  If the assignment was given after the conclusion of the call in window, the Reserve should make her/his request at the time of the assignment.  Crew Schedule approval of Reserve requests will not be unreasonably withheld.  Legalities and pay will be based on the originally scheduled deadhead.

13.    A Flight Attendant who chooses to waive the deadhead to a layover city is also considered to have waived any required legal rest for that layover city.

14.    Once Crew Schedule has approved a waiver of deadhead on a particular trip sequence(s), the Flight Attendant may not subsequently trade or drop that trip sequence(s).

15.    The provisions of Paragraph G will not apply to probationary Flight Attendants.

H.    DEADHEAD TO CREW BASE OR COMMUTER CITY ON LAST LEG OF A TRIP SEQUENCE

A Lineholder scheduled to deadhead on the last live leg of her/his trip sequence may choose not to take the deadhead.  The Lineholder shall notify Crew Schedule of her/his election prior to the scheduled deadhead.

1.    With Crew Schedule’s consent, a Reserve scheduled to deadhead on the last live leg of her/his sequence may choose not to take the scheduled deadhead, provided that she/he is available for her/his subsequent Reserve assignment.

3.    A commuter Flight Attendant who notifies Crew Schedule of her/his election under Paragraph H may also request to deadhead to her/his commuter city (as indicated in SABRE) in lieu of her/his crew base.  If granted, the commuter will be provided with positive space travel on the next available flight on either American Airlines or on a carrier whose inventory is controlled by the Company.  Positive space travel will be limited to one (1) segment within the forty-eight (48) contiguous states, unless the trip sequence includes more than one (1) deadhead segment at termination.  In no case will the positive space travel exceed the number of segments returning to base.  For International flights, positive space travel will be limited to one (1) leg back to the contiguous forty-eight (48) states.

4.    A Flight Attendant who would like to change her/his terminating deadhead segment to a different co-terminal airport should contact Crew Schedule to make such a request at the conclusion of the last working segment. Legalities and pay will be based on the originally scheduled deadhead.  A Flight Attendant who voluntarily requests to change the co-terminal of origination or termination will not be entitled to transportation; however, local agreements regarding transportation may apply.

Charters not built into sequences at the time of line construction shall be designated as open time flying within a crew base.

As an exception to the above paragraphs, when a Charter client requests a specific Flight Attendant crew, the Company will attempt to honor such request. Such exceptions shall not exceed ten percent (10%) of all charters and the Company will adhere to the “No Discrimination” provision of General, Section 37.A. Contractual language set forth in Hours of Service, Section 11, may be modified subject to Charter requirements, but in no case will the Company exceed the FARs.
————————————

The JSIC, on behalf of the APFA, continues to work with the Company every week on outstanding sections of the 2014 JCBA that have yet to be implemented. Additionally, APFA will pursue every avenue possible to provide the greatest flexibility and economic benefit to our workforce prior to FOI.