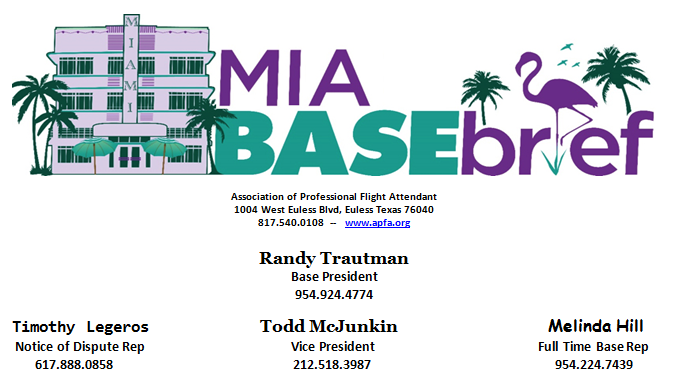 Hello Miami! This is a bid sheet, allocations, and reserve brief. We know there is much concern about the bid sheet, and most importantly, the reserve list. Please know we share your concerns. Through our monthly meetings with Allocations, Flight Service management, and the quarterly Joint Scheduling Committee we are always working to improve conditions for you.

We can beg, plead and negotiate, but understand that that there is no contract in the industry that allows a union to demand constrictions on reserve numbers. Likewise, our contract has legality parameters when building trips and, if the Company meets those contractual requirements, we are limited in our ability make changes or ask for specific sequence desires. For example, “commutable” is a non-starter. The Company will not entertain commuting issues.

Miami is geographically challenged and this is something we aren’t able to ever overcome. We have many, many destinations in the Caribbean, Central America, and domestically that are termed “short stage length.” Most of the islands, also many cities in the north and central US, are only 1-2.5 hour flight times from Miami. These short flight times make it very difficult for the optimizer to build trips that are either high time or few legs. It cannot build productive trips with short stage lengths. This is why many of our trips have 3 legs per day to get the trips up to a value that doesn’t produce pay and credit. Also, due to schedule and frequency, many of our destinations only operate two times daily. The first flight operates as a turn; the second is a short layover.

Miami is a Latin America and Caribbean hub, and the Company has made it very clear that there are no short or medium-term plans to increase any of our flying to Europe. Also, as long as the South American economies remain depressed there will be no growth there either. Rumor control—service to Johannesburg is not going to happen anytime soon. American does not currently have, or have orders for, aircraft that can return from South Africa with a full payload. Therefore, they are not interested in starting service there.

Everyone wants high-time, one-leg-per-day, 18-hour layovers, late sign-ins, and/or early returns. That is an impossible task, but trust that’s what we all want and strive for. If Miami was located 3 hours east to make every leg at least 3 hours, we would be in business for a beautiful bid sheet!

LET’S GET ON TO RESERVE!

At the Joint Scheduling Committee meeting in January, we argued statistics that we gather every month in an attempt to negotiate fewer reserve heads.  We compare September to February as both months are the shoulder season with fewer flying hours, similar lost time, etc. and compare favorably. For example, in Miami;

Those numbers were very lopsided, as you can see, and we saw no reason for it.

Reserve percentages will always experience a significant increase in December and January due to the holiday period and the schedule conflicts associated with the New Year. We are back down to 17% reserves for March, which is closer to our historical number.

The loss of jobs this February was a direct increase in reserve heads. It was absolutely unnecessary in our opinion, we objected, but we were told that the Company was paying too many hours of critical coverage pay, especially in Miami. Flight Attendants were getting into the habit of passing on makeup and waiting for critical coverage to open. The Company is determined to stop this practice. They would rather pay reserve unproductive guarantees to ensure they have adequate coverage.

There is good news! American has listened to feedback on the monthly bid sheet calls. They are willing to test some improvements beginning with the March bid sheet. A number of the enhancements are costly to the Company. These are the result of the majority of feedback from the national bid sheet committee. Everyone may not like the changes, but we are going to test them for a few months and see how they play out.

For the March bid sheet the following parameters have been put into the optimizer that builds our trips. These specifications apply to the 4FA weekly (757, A320) trips. The optimizer has been set to:

For the 3FA solution (A319, S80) the optimizer has been given parameters of:

Remember that this won’t always necessarily apply to trips that only operate one time a month. There is also a potential downside to some of these changes. It could make trips less productive and worth minimum time.

Until next time, fly safely!

Posted in MIA Base Briefs