Beginning November 1, the following portions of the JCBA Hours of Service (Section 11) will be implemented for LAA. These changes include the domestic on-duty limitations, changes to domestic layover rest, red-eye duty periods, On-Duty All-Nighter (ODAN) trips and Flagstops.

The changes coming on November 1st have many detailed provisions from Section 11 Hours of Service.

Domestic on-duty limitations in actual operations (Section 11.F)
Beginning November 1st, you will not be rescheduled or awarded/assigned reconstructed sequences beyond the on-duty maximums found in Section 11.F (see chart below). In actual operations, the operational on-duty max column cannot be exceeded when working a domestic trip. Additionally, you won’t be scheduled/rescheduled for more than 8:59 of block time.

Use the reference below to determine which chart will be used to calculate your domestic duty limitations: 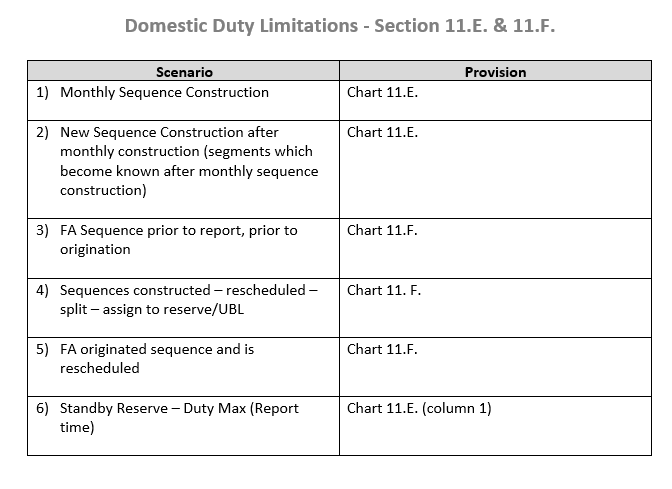 (Note to #4 on chart) The reference is to construct sequences that are awarded/assigned to Reserves/UBL for day before or the day of coverage.

Just like today, if irregular operations cause your projected rest period to fall below the 8:20 minimum, contact Crew Tracking who will either delay the departure time for the first flight of your next duty period or reschedule you to a different flight to ensure required rest.

If you don’t receive the required 8:20 minimum rest, all time (starting from report/sign in) will be considered a continuous duty period and you will be paid duty rig the entire duty period.

If this happens and you feel you cannot continue working the sequence, Crew Tracking will relieve you at the earliest possible time without causing a flight delay. If you have available sick hours, you’ll have the option of using sick time for the remainder of the trip. This would not count as an attendance occurrence.

* These provisions will be applied in actual operations as soon as practicable, scheduled for implementation no later than May 2018

Flagstops and ODANS (Sections 11.P and 11.Q)
A flagstop is rare, but can happen when multiple ODAN flights are combined. Here’s an example: