U.S. Reaches Agreement with Country of Qatar on Subsidization of Qatar Airways

Secretary of State Rex Tillerson announced today that the U.S. has reached an agreement with the country of Qatar to end its market-distorting practices that harm American workers. For the first time, Qatar has publicly acknowledged that it subsidizes its state-owned airline. Moreover, Qatar has agreed to use transparent and internationally agreed upon accounting and auditing standards to reveal the extent of the subsidy.

Qatar’s subsidization of Qatar Airways (more than $25 billion) violates its Open Skies agreement with the United States and harms the U.S. passenger airline industry and the 1.2 million jobs it supports 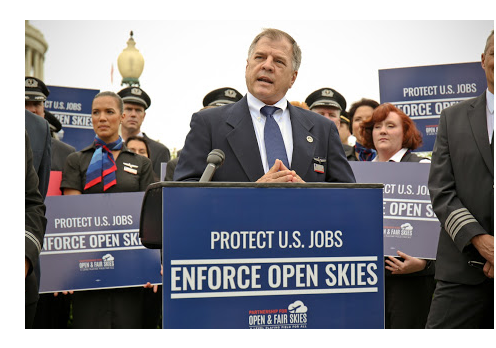 Qatar Airways also stated that they have no current plans to operate any fifth freedom passenger flights to the United States. (Fifth freedom routes essentially allow airlines to carry passengers between two countries without ever bringing them to the airline’s home country such as a New York—Milan—Doha flight where passengers can fly just the New York—Milan portion. Subsidies can enable foreign airlines to launch passenger fifth freedom flights on routes that may not ordinarily be justified, forcing fair-playing American carriers out and costing American jobs.) To be fair, Qatar has not operated fifth freedom routes thus far, unlike the United Arab Emirates (UAE) carriers, but this agreement assures us that they will not try.

“This is the first crack in the unity of the three Gulf carriers and confirms that they are not in lockstep when it comes to undermining U.S. jobs,“ said APFA National President Bob Ross. “We look forward to the State Department closely monitoring the implementation of this agreement and we will continue to contest Emirates and Etihad Airways’ unfair and anti-competitive practices that are hurting American workers. We hope the U.S. government will stand behind American workers and not let these two air carriers off the hook. American workers deserve a level playing field.”

We are grateful to the State Department and our 300+ allies in Congress for taking a stand on behalf of American workers. APFA and other union members played a significant role via emails, calls, tweets and visits to Washington, D.C. that helped mount the pressure to reach this agreement.

The fight is not over yet. We must hold Qatar’s feet to the fire to ensure that it lives up to its commitment. And now, the United States must take on the UAE and the billions of dollars of subsidies it gives to Emirates and Etihad Airways.