As reported last week: Effective in July for the contractual month of August, bids will open for non-PBS based Flight Attendants on the 11th and close on the 15th of the calendar month (see chart below). This adjusted line bidding timeline will remain in effect until the implementation of JCBA PBS. 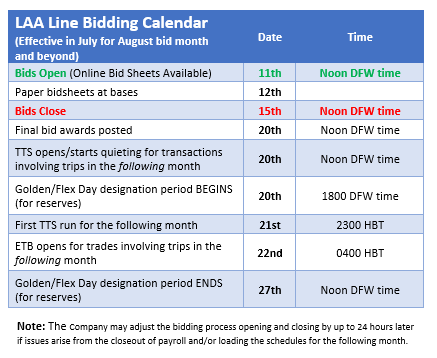 Q: What are Golden days (GD) and Flex days (FD) on reserve?
A: With the JCBA reserve language in Section 12, days off will have two different designations. A GD is an off day that the Company cannot schedule you to fly into. You may be scheduled into a FD, but only within a strict order of assignment. You will have 8 Golden Days and 4 Flex Days.Q: Where can I find when I can be assigned into a Flex Day?
A: You can find when you could be assigned into a FD in Section 12.J.9. (ROTA) and 12.K.2. (ROTD).

Q: I am an LAA Flight Attendant. How will I bid my monthly reserve schedule beginning with the August bid month?

A: You will bid as you have in the past from the published reserve lines with the exception that you will no longer see the M2 in your line.

Q: How will I know where my Golden and Flex days are?
A: Once the bid award is final on the 20th at 1200 noon DFW time, your awarded days off will be visible in Crew Portal. Starting at 1800 DFW time on the 20th until noon DFW time on the 27th, you will be able to use the GD/FD tool to re-designate a GD to a FD or a FD to a GD, within the contractual parameters (the link will be available on the bottom right hand corner of Crew Portal).

A: Yes, you may change the designation as many times as you wish, up until closing time of the GD/FD tool on July 27th at 1200 noon DFW time. The exception would be if you were to pick up a trip through ETB. At such time, you will see a prompt to finalize whatever designation you had elected.
Q: Where can I find more information on Golden/Flex Days?
A: You can review the GD/FD information in several places:

Still have questions or concerns after completing the web-based training modules on the upcoming changes (Crew Portal/ETB/TTS/ROTA/Rotating Reserve/PBS)? Please make use of the resources available on the JCBA HOT Topics Section on the APFA website as well as Crew Change on Jetnet.

In an effort to provide as many resources as possible for those looking to learn more about the new scheduling systems and newly implemented JCBA provisions, the Joint Scheduling Implementation Committee (JSIC) will be releasing weekly podcasts.

The first two Unity Pays Podcasts are hosted by Alin Boswell and Julie Hedrick and are now available on the APFA website. Head to the JCBA Hot Topics Section to listen to podcasts 1 and 2 on the following topics:

As you may recall, Legacy American Flight Attendants were included in a class action lawsuit brought about by three American Airlines employees regarding the fees charged for holding the American Beacon family of funds in their 401(k) portfolios between 2010-2015.

Former participants (employees who had left AA and closed out their 401(k) accounts) who completed a former participant claim form began receiving checks for their share of the settlement last week.

Current participants (active and former employees who have an open 401(k) account) received their share of the settlement directly into their 401(k) account on June 27th. The settlement amount can be viewed in your transaction history on the NetBenefits website (http://netbenefits.com/aa) and appears as a pre-tax “Change In Market Value” line item. The settlement money was split into the current election of funds at the percentages on file similar to a normal employee contribution thru regular payroll.

Each participant’s portion of the $22 million settlement was determined by how they were invested in both the disputed American Beacon Funds and the non-disputed fund options during the contested period between 2010-2015.

Questions regarding the settlement can be directed to the Claims Administrator at 855-755-4673 or Claims@AASupersaver401kSettlement.com.

Rescheduling After a Disruption

Crew Scheduling may reschedule you to flying other than your original sequence following a disruption to prevent a delay/cancellation only after exhausting all available standbys and ready reserves.

Prior to Origination (JCBA 10.J.3.d.): Crew Scheduling must advise you of a reschedule within 4 hours after sign-in, or 3 hours after the disruption is known, whichever is later.

After Departure (JCBA 10.J.4.a.): If you are mid-sequence, at either an outstation or home base, Crew Scheduling must advise you of a reschedule within 3 hours after the disruption is known. If not assigned replacement flying within the window above, you are released for the remainder of the duty day.

During the rescheduling time frame, you must be contactable by Crew Scheduling. If you miss a call from them during this time frame, you are required to return the call.

Per JCBA language, Flight Attendants on layovers (RONs) are required to have at least 8 hours of rest ‘behind the door’. Crew Tracking calculates 8:20, which estimates travel time between the airport and hotel. However, if 8 hours behind the door cannot be met in actual operations (due to delays, extensive travel time to the hotel, etc.), APFA has advised crews to contact Crew Tracking to advise them of the time they will be leaving the hotel based on the transportation available.

It has recently come to our attention that Crew Tracking has been mis-informing Flight Attendants who call to advise Crew Tracking of their rescheduled pick-up time, that they are only entitled to a total of 8:20 rest and that any more will result in a missed trip or a delay being charged to the Flight Attendants. This is incorrect information. You cannot be docked pay or disciplined for requesting your legal 8 hours of rest behind the door.

As a reminder, mock bidding for JCBA PBS is currently underway for LUS Flight Attendants and will continue through August, 2018. Please reference the JSIC Update from earlier this month for open, close, and award dates for PBS, TBS, and LRD for each mock bid.

APFA Headquarters will be closed Wednesday, July 4th in celebration of Independence Day. Live Chat will be available from 0900 – 1700 CT. APFA and the staff wish you and your family a happy and safe Fourth of July Holiday!