EULESS, TX (July 2, 2018)— For the 27,000 flight attendants of American Airlines, July 2 may be as significant as Labor Day this year. Newly elected officers of the Association of Professional Flight Attendants (APFA) officially begin their terms, welcoming a new Nation 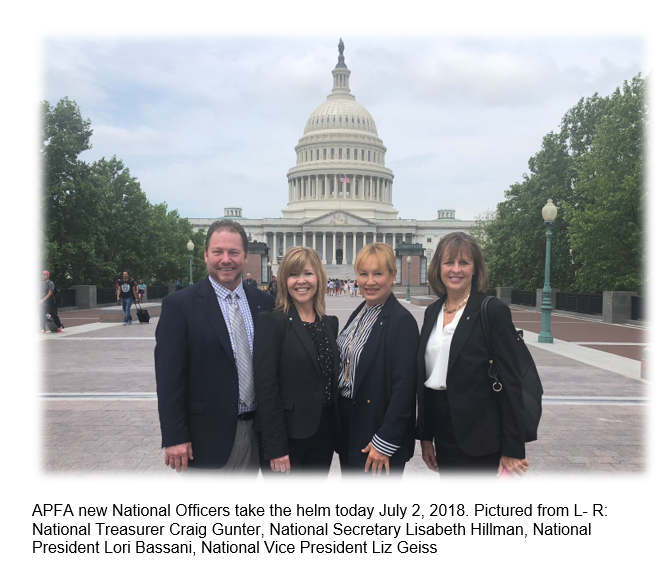 ​al President and National Officers to lead its membership forward on improving contracts and issues that affect the work environment and quality of life of its members.

Lori Bassani, a 32-year veteran American Airlines flight attendant based in Los Angeles, was elected by a commanding mandate in a race among seven union presidential hopefuls. Officers were elected by the Union’s membership in a special election overseen by the U. S. Department of Labor. The term runs through March of 2020.

Joining Bassani, three other National Officers round out the new team:

“My team and I are proud to serve all 27,000 of our members in one of the most challenging yet promising times in the history of our profession,” said Bassani. “We are emerging from a traumatic string of bankruptcies, givebacks, and industry restructuring. Our first order of business is to unify our members to set the stage for successful contract negotiations.” Section 6 bargaining may begin as early as December of this year.

Bassani added, “We are also facing unprecedented and monumental changes in scheduling and a new bidding system in a bankruptcy-negotiated contract. The APFA membership is comprised of flight attendants from almost 20 different airlines.”

“It’s paramount that the company provides the best preferential bidding system (PBS) for all our members. Holding the company accountable for scheduling systems that impact flexibility and daily work lives of flight attendants is of primary importance,“ said Bassani.

To kick off the new administration, Bassani and team will host a 4th of July BBQ in the parking lot of the Union Hall in Euless, Texas—(1004 W. Euless Blvd., Euless TX,  12:00n – 3:00pm) for all APFA members to celebrate a new beginning and meet their new National Officers.

The APFA is the largest independent Flight Attendant Union, founded in 1977. Bassani’s administration is the 16th since its inception.