Bidding Reserve in PBS
For bidding reserve days off, start by clicking on the Reserve Tab on the navigation bar. The large calendar on the left side will show the number of reserves which are needed each day according to planning’s calculation. Speaker reserves will see a different number than non-speakers for each day. 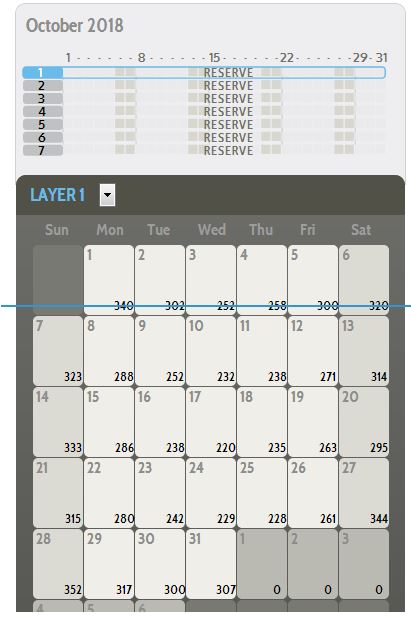 PBS allows you to build your reserve line by requesting your most important days off first and build upon them, while following contractual requirements:

When PBS reaches your seniority, before even reading your bid, it creates all legal, possible solutions (reserve patterns) that you could be awarded.  The system considers all planned absences, carry-over days, and days on or off from the month that leads up to the reserve month.

During the award process, PBS will continue awarding the days off you can hold layer by layer, as long as the combination makes a legal pattern (see above rules).  At each layer the system eliminates the possible solutions that don’t meet the criteria of the award that is being built until finally arriving at a legal solution.

Suzie has a 3-day trip at the end of the previous month. PBS would only select reserve patterns that have days off in the beginning of the month and patterns that start with 3 days of reserve. Remember, a minimum of 3 days on reserve are required, but any reserve line that would start with 4 days or more would create a 7-day legality and therefore are not considered based on this example.

The most important day off for Suzie is the 4th; she bids this day in layer 1.
Next, she bids the 11th, 12th and 20th in layer 2.
In layer 3 has the 10th, 19th and 30th.
PBS reads the requests in Layer 1. It now looks at all the lines that are available and selects all patterns that have the 4th off. It would keep these patterns in her pool and discard all others, then move on to layer 2.