On September 25, 1978, Pacific Southwest Airlines Flight 182 departed Sacramento for San Diego via Los Angeles. The flight from Sacramento to Los Angeles was uneventful. Four Flight Attendants and three Pilots were working the flight from Los Angeles to San Diego, with a total of 128 passengers onboard. The San Diego-Based Flight Crew included Flight Attendant Karen Borzewski, Flight Attendant Kate Fons, Flight Attendant Debbie McCarthy, Flight Attendant Dee Young, Captain James McFeron, First Officer Robert Fox, and Flight Engineer Marty Wahne.PSA Flight 182 collided mid-air with a private Cessna airplane as the PSA jetliner approached San Diego International Airport. All 135 passengers and crew perished in the crash. Thirty PSA employees were also deadheading/commuting to PSA’s San Diego base on Flight 182. The flight served as a shuttle service for many PSA employees because of the recent expansion of the airline throughout the state of California. Due to mandated FAA limitations on working hours, some crew members were restricted from operating the aircraft on return flights to San Diego. Other PSA employees were Los Angeles area residents commuting to work or planning to attend recurrent training at PSA Headquarters. In total, 144 people lost their lives in the accident, including the two Cessna pilots, and seven residents on the ground.

On this day, our hearts and prayers are with our former PSA Flight Attendants, who are now part of our American Airlines family. Our fellow Flight Attendants, Pilots and Co-workers who left us 40 years ago may be gone, but will never be forgotten. 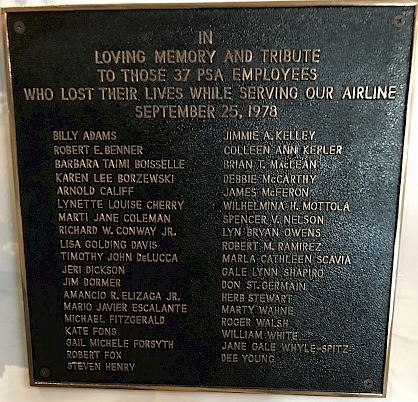