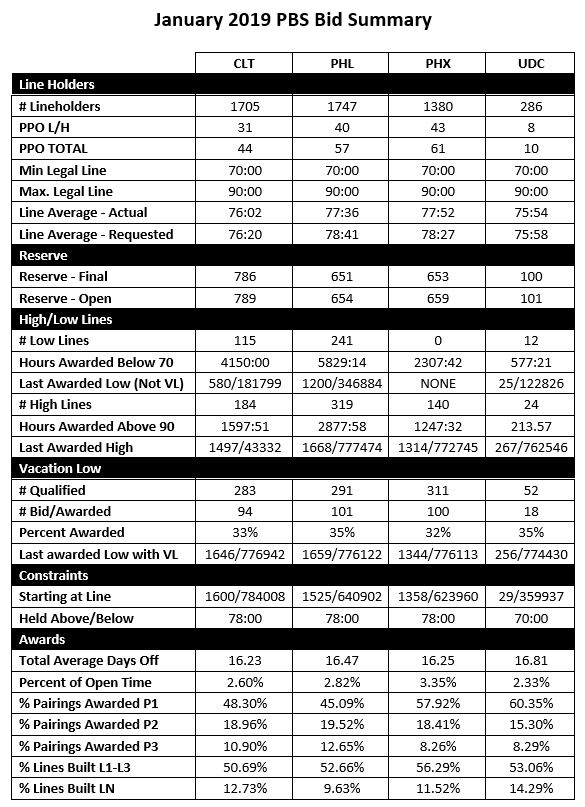 Here are a few definitions for some of the key terms to help you better understand the award summary chart:

Shadow Bid/Pay Purpose Only Bid – Crew Scheduling shall run PPO bids during the regular PBS award process. PPO bids are run with the same bids and settings as the regular bid with the addition of the bids (standing or actual) of any Flight Attendant, including Flight Attendants on a Voluntary Leave of Absence (VLOA), who is off the entire bid period to determine what she/he could have held for shadow bid/pay purposes only. Such PPO awards shall only be used for this pay determination and shall not change in any way pairing/sequence awards as published in the final line awards.

“Line of Time” shall mean a monthly unit of Flight Attendant flying containing a minimum of seventy (70) credit hours and a maximum of ninety (90) credit hours per bid period. The Company may flex the maximum line value by an annual amount of twenty-five (25) hours, but in no case more than five (5) hours during any given month. As an exception, a Flight Attendant may indicate a bid choice which may allow the bid award to exceed the bounds specified by bidding a High or Low bidding option.

Low Lines Option – For the January 2019 Award, lines constructed in accordance with this bid option shall be constructed to no less than forty (40.00) hours, and no more than 69.59 credit hours.

High Lines Option – For the January 2019 Award, lines constructed in accordance with this bid option shall be constructed to no more than one hundred and ten (110.00) hours and no less than 90.01 hours.