It is with great sadness that we report that Retired UDC Captain Paul Bates passed away Thursday, December 13, 2018. Paul had suffered with a long bout of cancer.

Cards and condolences may be sent to:

The company and the union are disagreeing on contractual and past practice of when a reserve’s call out time begins.

The company has recently changed a long standing practice that the call out time begins once positive contact has been made and is now stating that when a message is left on a reserve’s primary or secondary contact number, that begins the call out time. Once crew schedule leaves a message the reserve has up to 15 minutes to return the call. The union contends that a reserve is considered notified of an assignment or award at the point crew schedule and the reserve make positive contact. If a crew scheduler tells you that you have less time to report respectfully tell the scheduler that you will report within the contractual 3 hours.

A base NOD (Notice of Dispute)has been filed against this disregard for contractual language and past practice.

Report Time After the Conclusion of a RAP
(Reserve Availability Period)

The union and the company are disagreeing on when the last point of contact should be for an assignment
outside of the RAP end time in a co-terminal.

The company claims they have 3 obligations:
1- To contact you within your RAP.
2- To not assign a sequence that has a check in time more than 2 hours outside of the RAP end time.
3- To give you 3 hours to report.

The contract reads that a sequence report may be no later than two hours after the end of the RAP.
Sequence check-in time will not be shortened in order to make an assignment.

A reserve receives positive contact from crew schedule at 1300 for a sequence check-in at 1600. This would be contractually legal since the reserve has 3 hours to report and the check-in is 2 hours outside of the RAP end time.

In the same scenario the reserve receives positive contact at 1310 for a sequence check-in at 1600. This would not be a legal assignment since the reserve has 3 hours to report making the report 1610 and outside of the 2 hour window of the end of the RAP.

If this does happen to you, respectfully ask the scheduler why your check-in time is past 2 hours after the end of your RAP? If you are still told to report, speak to a scheduling supervisor (SOD)and report the issue to me. I am presently reviewing this practice with the company and unfortunately at this time we agree to disagree.

Base NODs will be filed if this isn’t resolved in a timely manner. If this scheduling issue has happened to you and you would like to request it taken forward please contact me.

A Standby will be assigned a sequence based on qualifications, days of availability, standby report time, and same terminal. If all things are equal the assignment will be made by seniority.

Crew schedule sets the required days of availability for each Standby shift.

A reserve in ROTA can bid for Standby with less than the available days needed, provided they use the waivers indicating they are willing to work into a FD/GD.

Also, Aggressive Reserves may use the waivers in order to hold Standby with less than needed available days.

Crew Schedule must indicate the days needed and the length of the Standby shift before ROTA is processed. Parameters are used in bidding rather than sequence numbers. The Standby start time, days of availability and hours of the shift can also be found in the monthly bid packet.

Currently the co terminal bidding function in ROTA and ROTD is not available. We have requested that this option be available as a bid preference going forward. January sequences will operate out of DCA/BWI/IAD.

A reserve Flight Attendant being assigned a sequence or standby shift at BWI or IAD can request a shuttle to/from these airports during times when there is no public transportation service available. When speaking with the crew scheduler or hotel /limo desk ask for a confirmed shuttle to transport you to/from one of these airports. The company is requiring you to be at the DCA airport to receive the shuttle service. If the company cannot provide such service you may take an Uber/Lyft/taxi and obtain a receipt for reimbursement.

We have seen situations where sequences have been processed out of UDC ROTD when the sequence was a DCA trip. If there are available reserves on the call out list for DCA ROTD then those Flight Attendants should be utilized.This incidence seems to be occurring when a sequence is rebuilt or changed and a new crew is called out. I spoke to Crew Schedule and they will look into why this is happening.

Standby Flight Attendants in UDC /DCA should be assigned sequences to their respective base unless there are no other Standbys available.

Priority of Assignment (12-M ) must still be used when covering sequence and standby shifts which remain open after future or daily processing.

Note : During actual operations Crew Scheduling may schedule or reschedule any available Flight Attendant to prevent a delay or cancellation.

Deadhead (DH) to Commuter City in Lieu of Crew Base

A line holding commuter Flight Attendant who elects to not take a DH to base to complete a sequence may notify crew schedule of their intent and request to DH to their commuter city. If granted the commuter will be provided with positive space travel on the next available flight to their commuter city listed in SABRE.

Crew Schedule is informing Flight Attendants that they must wait until the last working leg of a sequence is completed and then request the DH change. The union believes the intent of this provision was to give as much time in advance to make the changes to insure that a seat can be booked to the commuter city and to release the original seat to the company for rebooking. The only condition was that the sequence could no longer be traded once changes were made. A commuting reserve Flight Attendant may use this option provided they are available for a subsequent reserve assignment. Continue to use this provision and we will update you as soon as we come to an understanding with Crew Schedule on the timeline for changing the DH.

PBS sequence indicators for UDC changed in the January bid month. Unfortunately we were not notified of this change. The letter attached to the sequence numbers went from D to N.  I will follow up on as to why we were not alerted of such change. 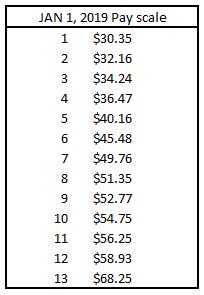 APFA Schedule and Contract Chairs Becky Lydecker and Erik Harris will be visiting DCA to teach fundamentals of FOS /DECS. Dates and times are to be determined. If interested stay tuned for more information in the coming weeks!

We would like to take this opportunity to thank you for all you do through out the year and wish you and yours a safe and joyous holiday season!