The Reverend Martin Luther King, Jr. is known for leading the civil rights movement and defeating racial inequality through peaceful protests and rallies. What you may not know about this extraordinary leader is that he also stood up for Union rights. As a result of the civil rights movement, Joan Dorsey became the first black Flight Attendant for American Airlines in 1964.

Dr. King believed that economic equality was just as important as civil rights. In March of 1968, Dr. King gave a speech to sanitation workers on strike in Memphis and said, “Now our struggle is for genuine equality, which means economic equality. For we know, that it isn’t enough to integrate lunch counters. What does it profit a man to be able to eat at an integrated lunch counter if he doesn’t have enough money to buy a hamburger?”

Today, we celebrate the life and legacy of Dr. King. This extraordinary man paved the way for many of us today. Dr. King believed in a nation of freedom and justice for all, and applied principles of peace and equality to make the world a better place for us yesterday, today and tomorrow. 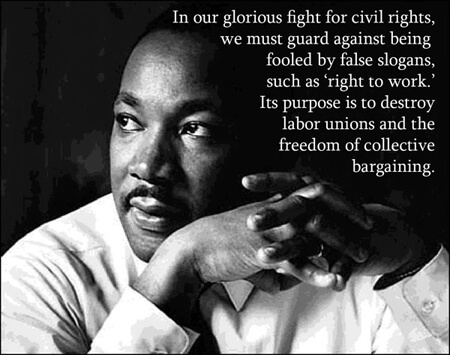