APFA Information and Q&A’s for JCBA Pay Protections and the Letters of Agreement
For Venezuela (CCS, MAR), Boeing 737 Oasis and the Boeing 737 MAX

Recently there have been 3 major issues that have affected Flight Attendants’ schedules resulting in a loss of paid hours.

APFA was able to come to an agreement with the Company for all three of these issues. The Letters of Agreement are a one-time exception to JCBA section 10.J. These LOAs are intended to make a Flight Attendant whole who have lost pay when the JCBA 10.J pay protections didn’t pay protect the original, awarded, sequence value.

The LOA’s have the same process for protecting Flight Attendants who have any flight cancellation(s) directly related to the 737-800NG Oasis, 737 MAX and the suspension of flights to Venezuela (CCS and MAR). Please refer to the Letters of agreement for the process.

We realize there has been much confusion regarding the LOA process and how it interacts with the contractual JCBA pay protections. Following is a Q&A to help alleviate confusion:

JCBA 10.J, 10.K and 10.L detail which situations are pay protected under JCBA pay protections. If you have a cancellation with a reschedule (as defined in 10.J), crew substitution or equipment substitution, you will be pay protected for the original value of the sequence at the time of award.

Full cancellations (all segments in your sequence cancel) you are not pay protected under JCBA. This does not mean one segment cancelled and the sequence was removed off your schedule.

Cancellations within a sequence without a reschedule (as defined in 10.J.1.e.i-vi), crew substitution or equipment substitution are not pay protected under JCBA.

2. What is considered JCBA pay protections?

3. Is Last Series/Last Sequence pay protection applied for these cancellations?

4. How will I know if I am being cancelled for the above listed issues?

American published a PDF (List of Cancellations 18MAR19-28MAR19) of the affected flights for Flight Attendants to reference for the MAX/Oasis. If your flight is listed, you are eligible for pay protection under JCBA or the LOA.

For the Venezuela cancellations you will know if your sequence was scheduled to fly there. Please call or email APFA, if you have further questions regarding any flight cancellation(s).

If you were originally scheduled on a 737-800 (B9) and your aircraft was taken to cover a MAX route/Oasis route you are protected as the affected FA under JCBA or LOA, whichever applies. The FA who is flying the MAX route/Oasis Route with your substituted 737-800 (B9) will not fall under the LOA protections because they flew their sequence.

6. Why is the list of affected flights the Company provided only dated Mar 18-28th?

It is a time-consuming process to capture the flights that have been impacted by the above listed issues. The Company will continue to update the document capturing flights related to these issues.
(List of Cancellations 18MAR19-28MAR19)

7. What is Crew Substitution?

When a Flight Attendant has been removed from a segment(s) in their sequence, and another crew flies that segment(s), its crew substitution. The original value of your awarded sequence is protected.

8. My sequence had a full cancellation 5 days from now, so I am not protected under the JCBA, how do I protect my pay under the LOA?

If you have experienced a full cancellation and want to protect your pay you are obligated to ballot beginning in the final TTS run prior to the origination date of the fully cancelled sequence for a “like” sequence. If you are not awarded a trip in the TTS run, you are obligated to pass to the UBL up until the 1500 UBL run the day prior to the origination of your fully cancelled sequence.

Example: It’s the 20MAR and my turn cancelled on the 24MAR

9. Crew Schedule notified me of my turn fully cancelling the day prior at 0900 the final TTS run has passed; how do I pay protect myself under the LOA?

Remember timeline of events matter. If you were notified about the cancellation after the final TTS run, then you are only obligated to participate in the UBL run from the time of notification(0900) until 1500 the day prior to your affected sequence. You must ballot for “like” sequences.

All flights within that duty period must cancel for it to be considered a full duty period cancellation. In most cases, affected duty periods will be pay protected under JCBA pay protections if there was a crew substitution, equipment substitution, and/or reschedule as defined in 10.J. You should check first if any of those apply.

If all flights within a duty period cancel you would follow the process for “like” sequences that are comparable to the duty period in which you fully cancelled.

Example: After report, you are notified all the flights in the 3rd duty period fully cancel changing your trip from a 3day to a 2day. There was no crew sub, equipment sub or reschedule as defined in 10.J.

11. I am a reserve, picked up an ETB sequence on days off. It fully cancelled, what is my obligation under the LOA? 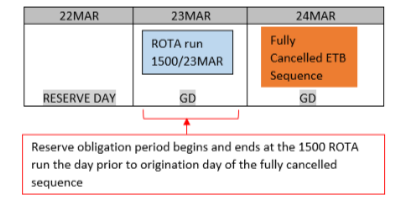 12. Are there pay protections for reserves with sequences originating on reserve days?

LOA protections would not apply. JCBA protections will apply to reserves with sequences that originate on reserve days if applicable.

13. Are lineholders or reserves protected for ETB trips they picked up over vacation?

They are not protected under the LOA. They cannot participate in TTS/UBL/ROTA to be able to follow the obligation process in the LOA. JCBA protections will apply if applicable.

14. I had a 3 day with a DFW turn in the last duty period that cancelled. I worked a flight that same day prior to both segments cancelling. Am I pay protected under JCBA pay protections?

Since it was a cancellation within a sequence and there was no crew substitution, equipment substitution and/or reschedule, JCBA protections would not apply. Having segments within your sequence removed, as described in 10.J.1.e.i-vi, are not considered reschedules. This would be pay protected to the original awarded value of the sequence with the LOA protections.

15. Do I have to follow the LOA process for pay protection if I had cancelled segments in my sequence?

Must bid all positions

17. Is it the same for “like” sequences for full duty period cancellations?

It is similar, but not the same. For a full duty period cancellation, you ballot for comparable report time/release times. You are not required to waive your contractual Home Base Rest(HBR).

18. When will I see the LOA pay protections?

19. Is there an easy way to tell if I am pay protected under JCBA excluding LOA pay protections?

In FOS (DECS) you can tell by some of the codes used on your HI1.

In FOS (DECS) you can tell by some of the codes used within your HI3.

(You can also see these codes on your HI1/HI3 in MobileCCI. These are not an inclusive list of the different types of FOS codes you will see on a HI1/HI3.)

20. When I was first removed from my sequence only one leg had cancelled. I was removed with an XP code. Then later the other flights cancel, am I pay protected?

21. When I look at my HI1, I see that I was removed with a paid code XR, but I am only showing being paid 5hrs of my original 10hr sequence. Do I need to send a Direct Connect to capture the rest of the pay?

No. Crew Comp’s program to capture the JCBA pay protections was programmed to auto capture pay protection minus the cancelled segments prior to the June 2018 Pay Protection Settlement. Currently the Company has been capturing these pay protections at closeout (on the 8th of the following month). The Company is hoping to have the updated programming to capture the cancelled segments automatically in the next year. APFA has asked to make this a top priority. It is currently on the list of top priority programming changes.

22. After I see I am pay protected what happens if I trade or drop my sequence?

JCBA 10.J.2 states that pay protection only applies to the flight attendant who held the trip at time of repair. If you had a 12hr sequence and it was modified becoming a 10hr seq you will be pay protected for 12hrs, however if you drop or trade the sequence the person trading/picking up for your sequence will only be paid 10hrs since they were awarded/received the sequence at the new value of 10hrs. You will also forfeit the protections if you drop your pay protected sequence.

23. Do I have to call FABRC with my “like” sequence TTS/UBL Ballot ID# as I would with a PBS misaward?

Currently no. The Company believes they will be able to track the ballots without requiring you going thru the FABRC. They will communicate should this change.

24. When I put in my “like” sequence parameters for the LOA pay protections I receive a response from TTS/UBL“No sequence results returned. Please change your criteria and try again”. What should I do to get the LOApay protections?

Currently we are aware of this issue and are working with the Company for a solution. In the interim, we ask you screenshot your response(s) and send it to APFA via the System Issues Report Form only. This will direct them to one location in the event we need them at a later date. Within the System Issues Report Form you will see a tab with the selection “no results – 737MAX”. Click that, complete the form and upload your screenshot. Here is what the tab looks like within the form:

You may use this form for the Oasis as well. Just click on the “no results-737MAX”.

25. How will I know if I followed the process correctly?

If you fall under the JCBA pay protections, there is nothing you need to do. If you fall under the LOA pay protections for a full sequence cancellation or full duty period cancellation and balloted for a “like” sequence in the obligated TTS/UBL runs you have met your obligation. The Company can see past ballots that have run thru TTS/UBL. They would be able to tell if you followed the process. If you run into the “No results” situation above, please send in the screenshot via the above instructions.

26. Can I opt out of the pay protection?

27. My trip had cancelled prior to having the LOA and it I didn’t know about the TTS/UBL obligation, am I payprotected under the LOA?

Yes. Timeline of events is key here. If you didn’t know about the LOA process prior to being notified of your trip being modified/cancelled due to the 737 MAX, Oasis, and Venezuela routes (CCS,MAR) you will be pay protected either thru the JCBA pay protections or the LOA pay protections.

28. I have trips in APR as part of my bid award that have been affected. Will the LOA pay protect me?

29. I had a lot of cancellations and I am worried when I will receive the LOA protections?

The Company has agreed to pay the full cancellations and full duty period cancellations first to help alleviate any financial difficulty for Flight Attendants while they work thru the manual process of capturing these pay protections.

30. Can I double dip on top of my pay protection?

Section 10.E.3.m states: A Lineholder may conduct TTS transactions that would result in actual flying on a day(s) pay protected by any other portion of Section 10. The Lineholder will receive pay and credit for such time.

While we continue to discuss this with the Company, their position is an ETB transaction on a pay protected day will negate the pay protection for the entire sequence.