In this special edition of APFA’s Weekly Scoop, we are referencing JCBA Contractual sections that relate specifically to each department within APFA. It is important to be familiar with our Contract. The JCBA is available at APFA.org, on your FA Tablet, and spiral bound copies are available at the Crew Service Center in your respective base.

A Flight Attendant will be paid fifteen dollars ($15.00) for each random drug or alcohol test she/he is required to undergo after her/his release from duty. There will be no credit associated with the test or the payment. “(3.H.)”

If you are required to perform both a drug and alcohol test during the same screening, you will be paid $30.

4. A Flight Attendant will not be required to participate in a random drug or alcohol test prior to the commencement of a duty period. “(33.C.1-4.)”

1. The Company shall provide a means for payroll deductions for any Flight Attendant who
completes an APFA PAC Wage Deduction Authorization Card, as provided in Paragraph A.4.

a. The Company shall deduct a monthly contribution to APFA PAC from the pay of each
Flight Attendant who voluntarily authorizes such contributions on a form provided for that
purpose by the Union. “(36.A.1. & 36.A.4.a.)”

SECTION 25 – LEAVES of ABSENCE/APPROVED TIME OFF

b. Immediate family shall include a Flight Attendant’s spouse, domestic partner as defined in Company policy, children, step-children, grandchildren, parents, step-parents, grandparents, brothers, sisters, legal guardian, and spouse/domestic partner’s family (parents, step-parents, brothers, sisters, and grandparents) or relative who actually resides with the Flight Attendant. Bereavement will also be granted in the event of death of any member of the employee’s household residing at the same address.

c. Bereavement Days must be taken within thirty (30) days of the date of the death, absent mitigating circumstances. “(25.L.1.a-c.)”

a. The expense for the transportation shall be paid by the hotel, or

c. Reimbursement shall be made on the paycheck containing the pay exceptions for the month following the submission of the expense. The Company may require receipts to be submitted from a Flight Attendant seeking reimbursement. “(6.C.2.a-c.)”

A. A Flight Attendant who becomes ill or injured as a result of an occupational incident shall receive Workers’ Compensation benefits in accordance with individual State laws.

f. If a sequence is legal for more than one (1) RAP, Crew Schedule shall assign the
sequence as follows:

2. For sequences which are open more than two (2) hours prior to scheduled departure (three
(3) hours in co-terminal bases), Crew Schedule shall assign such sequence in the following
order subject to the provisions of Paragraph K.1:

a. Lineholders on the Unsuccessful Bidder’s list pursuant to Scheduling, Section 10.F.3.b;

b. “Aggressive Reserves” on RSV days within their RAP, from the most senior to the most
junior, who are legal to operate the sequence in its entirety and provided the sequence
matches the Aggressive Reserve’s list of preference as specified in Paragraph K.4.d.
An Aggressive Reserve called by Daily Scheduling during the Daily Reserve Assignment
process shall be required to accept any sequence which meets her/his list of
preferences;

c. Reserves on a RAP from the same grouping who are legal to operate the sequence in
its entirety according to the priority established in Paragraph K.1.e;

d. Reserves on a RAP from the next highest grouping according to the priority established
in Paragraph K.1.e;

e. With Crew Schedule consent, “Aggressive Reserves” on a RAP who indicate a desire to
work on or be assigned into a Flex Day(s) or Golden Day(s) provided the sequence
matches the Aggressive Reserve’s list of preference as specified in Paragraph K.4.d; “(12.K.1.f.i-ii. & 12.K.2.a-e.)”

The following sections of the contract determine how we are paid out for our unused vacation and sick time upon retirement.

B. VACATION PAY AND CREDIT

2. A Flight Attendant who has completed her/his probationary period and whose service with the Company is terminated shall be paid for any accrued vacation. “(8.B.1 & 8.J.2.)”

SECTION 26 – INSURANCE, RETIREMENT, AND OTHER BENEFITS

5. Upon retirement, pursuant to Company policy, a Flight Attendant will be paid eight dollars and sixty-five cents ($8.65) for each hour of accrued sick leave in her/his sick bank. “(26.D.5.)”

T. The Company and the APFA EAP recognize the Critical Incident Stress De-Brief Program (CISD) is a collaborative policy which is jointly managed and monitored. The parties agree to meet upon either parties request for the purposes of determining policy updates and/or revisions as well as resolving any current concerns regarding the policy. Under no circumstances will the policy be changed without the mutual consent of both the APFA EAP and Flight Service. “(34.T.)”

When a flight departure is delayed for more than three (3) hours, the Flight Attendant who is scheduled for such flight shall not be required to stand by and shall be relieved of duty at her/his request, provided that other Flight Attendants are available to replace her/him without increasing the delay. A Flight Attendant desiring to be released shall remain on duty until the relief Flight Attendant reports for duty. A Flight Attendant exercising this option shall forfeit any pay and credit that may be accumulated under any other Paragraph in Section 10. “(10.J.8)”

Note: This Contractual provision applies only to the first flight departure of an entire sequence. 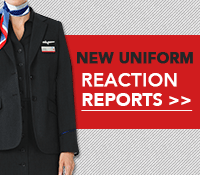 As of today, there have been 5,054 Flight Attendants who have filed Uniform Reaction Reports.