Yesterday marked the 25th Anniversary of the crash of USAir Flight 1016 near the Charlotte/Douglas International Airport.

Flight Attendant Richard DeMary’s life saving measures earned him the FSF Heroism Award which he received in 1994 at FSF’s 47th annual International Air Safety Seminar in Lisbon, Portugal. Flight 1016 is a reminder of the significance of our career as Flight Attendants in quickly and safely evacuating passengers in a catastrophic event such as this one.

In an excerpt from an article in Flight Safety Foundation Cabin Crew Safety, March-April 1995, Flight Attendant DeMary was quoted: 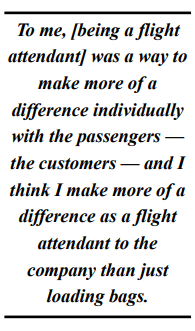 APFA honors the bravery and courage the entire crew displayed that evening. We also remember those who lost their lives on that tragic evening.
Posted in Hotlines - 2019 and tagged Flight 1016, In Memory