Today marks the eighteenth anniversary of the tragic 9/11 attacks that changed our lives and history forever. Every day we remember the bravery of the Flight Attendants and Pilots on board the four airplanes. They are our heroes.

Today, Flight Attendants are known as First Responders, a much different description of our profession from the days of stewardesses and stewards. On this Patriot Day, please take a moment of silence to pay tribute and honor our colleagues, friends, and loved ones who lost their lives that day. It is important to always remain vigilant, and most importantly never forget!

APFA National President Lori Bassani made the following statement on this anniversary of the 9/11 attacks:

“Eighteen years ago, twenty-five Flight Attendants, eight Pilots, and hundreds of passengers lost their lives in the horrific terrorist attacks that forever changed our industry and America. We continue to remember and honor the women and men who perished that day. Today, we remain vigilant and unified to ensure this type of hate and injustice on mankind never happens again.”

10:03 a.m.: After learning of the other attacks, passengers on United Airlines Flight 93 launch a counterattack on hijackers aboard their plane to try to seize control of the aircraft. In response, the hijackers crash the plane into an empty field near Shanksville, Pa. 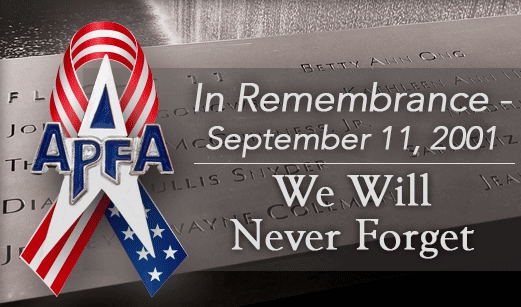