The election of our new National Officers is in about two weeks. January 29th to be exact. Spread the word…”Every Vote Matters.”

The newly-elected National Officers will assume office on April 1, 2020, for a four-year term of office ending on March 31, 2024.

Our Sisters and Brothers from all AA Unions joined together at the all union summit hosted by APA recently. Topics of discussion included the Railway Labor Act (RLA), legislation and government affairs, and other membership priorities. The summit attendees reflected their collective commitment in  a letter of unity and support.

Remember to wear your Union pins proudly while in uniform to show your solidarity. Need a pin? Ask your Base President, Vice President, base mobilizer, activists or call the APFA membership desk at 817-540-0108 ext. 8153 to order one.

Don’t forget to watch for the Negotiations Scheduling Survey. We need your input for this next phase of bargaining. We want 100% participation!

As was mentioned last week, the Arbitrator for the Attendance & Performance Presidential Grievance received post-hearing briefs from APFA and the Company on December 20, 2019. During the next few weeks, we expect that the Arbitrator will be reviewing the parties’ filings, plus the extensive evidence, and testimony presented by both sides during the five-day hearing.

This is a monumental case with many issues for the Arbitrator and Arbitration Board to consider. We are proud of the Flight Attendants who came forward to testify, and the hard work that has been put into this case to fight the Company’s unreasonable Attendance and Performance Program.  This case is now before the Arbitrator for a final decision. We will continue to update you.

Our Brothers and Sisters at APA plan to conduct informational picketing on Jan. 29th from 1300 to 1500 at DFW’s Terminal  D. The unity rally at Texas Live in Arlington will follow later that evening.

If you’re not scheduled to fly that day, or if your schedule will take you through DFW, we strongly encourage you to join the picket line, at the rally, or both.

Transition to the mobileCCI  App Now!

On January 22, old mobileCCI will no longer work on your tablet or personal devices.  Don’t forget to upload the new app ASAP.

What You Need to Know About Cabin Cleaning Duties

In April 2019, the Company informed APFA that they will not be implementing the cabin cleaning duties outlined in JCBA Section 37.F.

This provision was intended to be implemented concurrently with all bases moving to PBS.

Since then, the company has not communicated any plans to implement it and Flight Attendants are currently not responsible for any cabin cleaning duties.

This week, Senator Ed Markey (D-Mass.) was joined by Senators Richard Blumenthal (D-Conn.) and Tammy Baldwin (D-Wisc.) in calling on Boeing’s Board of Directors to immediately cancel a $7 million bonus payment for its new CEO. An incentive payment conditioned on the ungrounding of the 737 MAX continues this pattern of negligent corporate-decision-making and shows that Boeing is still prioritizing profit over safety.

“This payment represents a clear financial incentive for Mr. Calhoun to pressure regulators into ungrounding the 737 MAX, as well as rush the investigations and reforms needed to guarantee public safety,” the Senators wrote in their letter to the Board. “We believe that this bonus would be unconscionable in the face of two tragic plane crashes and proof that Boeing has not learned its lesson.”

In their letter, the Senators also express concern about a $62 million exit package that Boeing is providing to its former CEO, Dennis A. Muilenburg. The magnitude of this compensation stands in stark contrast to a recent announcement that 2,800 employees on Boeing’s supply chain have received layoff notices due to the “ongoing uncertainty” surrounding the 737 MAX.

Senator Markey has also introduced the Safety is Not for Sale Act, legislation that would prohibit airplane manufacturers like Boeing from charging additional fees for safety-enhancing equipment.

Do Your New Lands’ End Uniforms Have This Label? 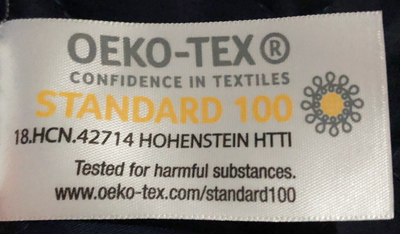 American is the first and only airline to carry the Standard 100 certification on all of their garments. That means that every single garment has been tested for banned dyes, pesticides and other hazardous chemicals. In fact, all parts of the garment are tested – from sewing threads, buttons and zippers, to the textile mills where fabrics are made and factories where the garments are sewed. This is unique to the Standard 100 certification, the highest garment certification.

What does the label mean?
If a textile article carries the STANDARD 100 label, you can be certain that every component of this article, i.e. every thread, button and other accessories, has been tested for harmful substances and that the article therefore is harmless in human ecological terms. The test is conducted by our independent OEKO-TEX® partner institutes on the basis of our extensive OEKO-TEX® criteria catalog. In the test they take into account numerous regulated and non-regulated substances, which may be harmful to human health. In many cases the limit values for the STANDARD 100 go beyond national and international requirements. The criteria catalog is updated at least once a year and expanded with new scientific knowledge or statutory requirements. It is not easy for manufacturers and customers to keep an overview of the legal situation concerning harmful substances every day. Our experts from the OEKO-TEX® institutes do this for you.

What articles can be certified?
In principle, all textile articles in every stage of processing are suitable for a STANDARD 100 certification, starting from the threads to the finished fabrics and finished articles. According to a modular system we test every single component and ingredient before the final article is allowed to carry the STANDARD 100 label. This includes threads, buttons, zippers and linings. The prints and coatings applied to the outer material are also tested for harmful substances according to the criteria applicable to them. Whether baby textiles, clothing, home textiles or decorative materials: Products carrying the STANDARD 100 label signal trust.

When checking in at an airport hotel please verify with the front desk your hotel departure time or pick-up time.

APFA has been advised that the sign-in sheets are pre-populated with a pick-up time intended to have Flight Attendants arrive at the airport for their scheduled report time.  Unfortunately, these pick-up times do not always coincide when transportation is provided by the hotel.  The Company is working to have these times removed from the sign-in sheets.

When staying at a downtown hotel the departure time or pick-up time is correct as transportation is scheduled based on the manifest.

A group is closed if the number of Reserves is equal to or less than the number of open sequences.  Groupings can open and close with each award/assignment processed.  If your grouping is closed at the time your seniority is processed, you will be awarded or assigned a sequence.  If higher groupings are open and junior Reserves are available, a ROC bid may allow you to be skipped during Step 3 of ROTA processing, Award/Assign Sequences to Available Reserves.  If you are able to ROC, you will be passed to Step 4, which assigns Standby shifts to the unassigned Reserves in inverse seniority order, based on days of availability and previous standby shifts assigned (Standby Clicks).

Additional information for Speakers can be found in the attached hotline,

Over the past several months infractions and violation utilizing KCM® have been on a steady increase. The KCM® program is 100% voluntary and it is a privilege.

If you are unable to comply with  the current KCM® rules for use, please utilize the normal security screening lanes.

APFA is currently meeting with the Company and TSA/ DHS to ensure our continued participation in the program.

The Rule for the Use of KCM®

Crewmembers also may be directed to passenger-screening lanes whenever the KCM® access point is not operational.

If TSA cannot confirm a crewmember’s identity or current employment status at the KCM® access point, the crewmember will be directed to the passenger-screening checkpoint.

Crewmembers should follow TSA instructions and not attempt to resolve the issue with TSA officers as they are unable to rectify system failures or denials. A KCM® denial could result from a database error that is nonspecific to that crewmember, or it might involve a miscommunication with the crewmember’s airline database.

If a crewmember believes that a KCM® denial occurred relative to employment status, they should proceed to the passenger-screening checkpoint for screening and, when time permits, ask an airline supervisor for assistance with the airline KCM® record.

As of today, there have been 5,141 Flight Attendants who have filed uniform reaction reports.

Posted in Hotlines - 2020 and tagged The Scoop, Weekly Scoop