“Let no man pull you so low as to hate him.” 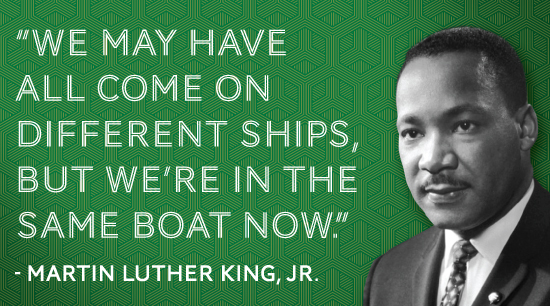 Today, we celebrate the life and legacy of Dr. Martin Luther King, Jr.

Martin Luther King, Jr. was a Baptist minister who became one of the most famous civil rights activists in American history. His achievements and impact on the Civil Rights movement are nearly impossible to overstate, but include leading the Montgomery Bus Boycott, which lasted for over a year and ultimately led to the end of segregation on Montgomery public buses. He also helped organize the March on Washington, where he delivered his iconic “I Have a Dream” speech. He was a prominent voice against segregation and racial inequality, poverty, and war. Dr. King became the youngest person to receive the Nobel Peace Prize for his efforts to end segregation and racial discrimination and was posthumously awarded the Presidential Medal of Freedom and the Congressional Gold Medal.

Dr. King was a believer in the power of unions and the labor movement. He noted that “[t]he labor movement was the principal force that transformed misery and despair into hope and progress.” Speaking against “right to work” laws in 1961, Dr. King said:

“In our glorious fight for civil rights, we must guard against being fooled by false slogans, such as ‘right to work.’ It is a law to rob us of our civil rights and job rights. Its purpose is to destroy labor unions and the freedom of collective bargaining by which unions have improved wages and working conditions of everyone…Wherever these laws have been passed, wages are lower, job opportunities are fewer and there are no civil rights. We do not intend to let them do this to us. We demand this fraud be stopped. Our weapon is our vote.”

We owe the late Dr. King a debt of gratitude for his advancements in the labor movement and also his hope that the world would be a better place for us yesterday, today, and tomorrow.

We cannot walk alone. And as we walk, we must make the pledge that we shall march ahead. We cannot turn back. – Dr. Martin Luther King, Jr.