When Congress passed the CARES Act last week, billions of dollars were earmarked to protect the aviation industry. Direct grants to air carriers were negotiated and fought for and eventually secured thanks to the strong, unified advocacy of organized labor. We ensured that these grants were allocated for the sole purpose of protecting Flight Attendants and aviation workers – our wages, our benefits, our jobs.

The grants are directly and exclusively tied to payroll assistance of aviation workers through September 30th, 2020. These grants mean no furloughs and no reduced benefits for our members through the end of September. However, a last-minute provision in the legislation also gave Secretary of Treasury Mnuchin the power to take ownership stakes in the airlines in exchange for the airlines accepting the payroll grants. This was not the intent of the majority of Congress. Due to this provision, in actuality the grants become more like loans. The airlines are forced to evaluate their financial viability under these conditions and whether having the government as a possible stockholder makes sense.

The intent of Congress was crystal clear: keep aviation workers on the payroll so that we do not have to draw on unemployment insurance and so that aviation can be poised to lead the nation’s economic recovery.

Leaders from our Flight Attendant unions stand together with the one shared goal: to make it clear to Secretary Mnuchin that we, as taxpayers, expect our grant money to flow solely to the front-line workers as intended, and that we are not interested in the government ownership stakes in the airlines that threaten our jobs.

We are people whose livelihoods should not be endangered by political gamesmanship. Much-needed worker relief and protections cannot be jeopardized in exchange for partial government ownership of American Airlines. 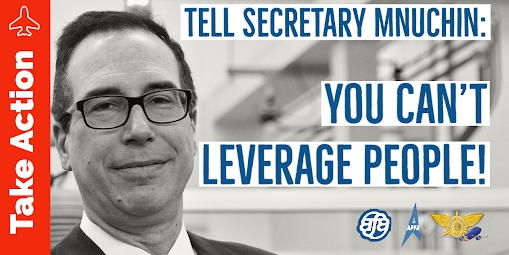