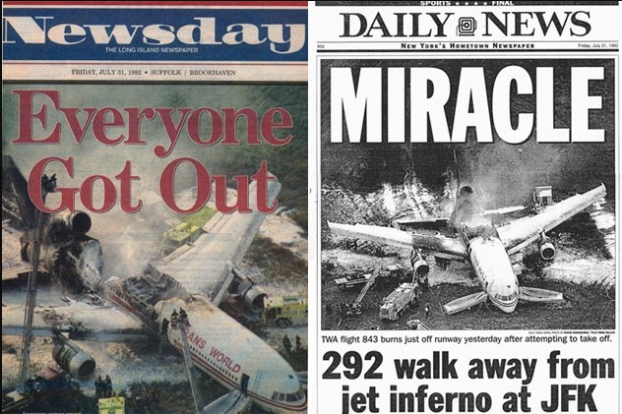 TWA Flight 843 was a passenger flight that crashed after an aborted takeoff from New York’s JFK Airport to San Francisco International Airport on July 30, 1992. The Pilots aborted takeoff when a warning system indicated that the engines were stalling. Despite an intense fire after the crash, the crew comprised of nine Flight Attendants and three Pilots were able to successfully evacuate all 280 passengers from the Lockheed L-1011 aircraft. In addition to the crew five commuting Flight Attendants and two commuting Pilots assisted in the successful evacuation of the aircraft.

With only three evacuation slides operative, the crew was able to successfully evacuate all 280 passengers in less than two minutes. Utilizing the skills taught in initial Flight Attendant training and refreshed every year, the crew exhibited a textbook evacuation. On this 28th anniversary, APFA recognizes and honors the heroic actions of the entire crew of TWA Flight 843.