Today marks the beginning of National Hispanic Heritage Month, honoring the culture, heritage, and many contributions Hispanic Americans have made to this country and the Labor movement.

National Hispanic Heritage Month allows us to reflect on Hispanic American’s contributions to the Labor movement. Among the most influential contributors are Dolores Huerta and César Chavez, two powerful Labor Leaders responsible for co-founding the National Farm Workers Association (NFWA). 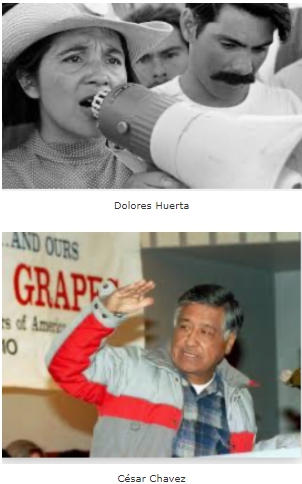 In 1955, Dolores Huerta was making a name for herself as a leader of the Stockton Community Service Organization (CSO). During that time, she founded the Agricultural Workers Association, set up drives to increase voter registration, and demanded improvements from local government to local farmworker neighborhoods. César Chavez was a Director of the CSO simultaneously, and the two quickly realized they shared a common vision for workers’ rights through organizing.

Breaking away from the CSO, Huerta and Chavez formed the National Farm Workers Association (NFWA). In 1967, in the name of solidarity and ‘power in numbers,’ the NFWA merged with the Agriculture Workers Organizing Committee to represent the Filipino-American grape farm workers and form the United Farm Workers (UFW) Labor Union. During the Delano Grape Strike, which took place from 1965-1970, Huerta and Chavez were recognized for the effectiveness of their non-violent methods of strikes and boycotts to pressure farm owners to implement quality of life improvements. As a result, the workers received wage raises, increased safety measures at work, and the introduction of a health plan.

Huerta and Chavez continued their work to improve working conditions for farmworkers and were instrumental in passing the California Agricultural Labor Relations Act of 1975, which defined a path for workers to form Unions and bargain for better wages and working conditions.

Dolores Huerta and César Chavez received much-deserved recognition for their work, which brought dignity to the workers they represented. Among those awards was Huerta’s reception of the Eleanor Roosevelt Human Rights Award from President Clinton in 1998 and the Presidential Medal of Freedom, bestowed by President Obama in 2012. Upon receiving the award, Huerta explained, “The great social justice changes in our country have happened when people came together, organized, and took direct action. It is this right that sustains and nurtures our democracy today. The Civil Rights movement, the Labor movement, the Women’s movement, and the Equality movement for our LGBT brothers and sisters are all manifestations of these rights.” Huerta continues her advocacy for workers’ rights.

Chavez, who passed away in 1993, received countless awards for his work to advance workers’ rights. Among them, the Jefferson Award for Greatest Public Service Benefiting the Disadvantaged in 1973 and the 1994 Presidential Medal of Freedom from President Clinton. While Chavez and his words inspired those who yearned for better, his words continue to resonate with us today as we continue the march towards equality and inclusivity for all: “Once social change begins, it cannot be reversed. You cannot un-educate the person who has learned to read. You cannot humiliate the person who feels pride. You cannot oppress the people who are not afraid anymore.”

This month and every day, we remember and are grateful for the contributions that the Hispanic American community has made to the Labor movement and the push to ensure equal rights for all.