We had our monthly call with the Company concerning the trips for December this week and to say we were in shock would be an understatement. We all have seen the changes throughout this pandemic and the crisis in the airline industry. Continuous changes to our schedules have become the norm, the unpredictability of where we are heading has been the driving factor that has led us to our current state. We have all been resilient and adapted to the changes with professionalism and grace. This is the very nature of the job, adapt to an ever-changing environment. Whether it be a snowstorm, hurricane or a disruption to our catering service, we know we have to adapt to the conditions and provide the best service possible to the customers. This is a time of financial crisis for our Company and for our industry. In a time of crisis, you can see very clearly what the Company priorities are and how they really view their employees. Based on how this Company has mishandled this crisis from the beginning, you would think there is little that could shock us now. You would be wrong.

The Company handed us the trip packets for December and gave us 48 hours to view them. Last month we asked the Company for changes to how the trips were constructed and the distribution of those trips to help alleviate the historical holiday problems and the current ones (more one and two days for example). Once your Charlotte team began to examine the trips it became very clear the company decided not to take our suggestions but that some of the trips seemed to be off. By the next morning it was clear the Company not only made the trips less desirable, but they were also stretching the bounds of the contract by mixing equipment and staffing within a single trip. What we saw were trips that would be staffed with four flight attendants (Say, a 321 AC)  and one flight segment within the trip would be scheduled to fly on a 777 AC staffed with eight flight attendants. The additional Flight Attendants for that leg would be a crew from another base. The Company has decided to bring back wide body flying to domestic routes but did not set these trips apart and build them as stand-alone trips. They decided to mix wide-body equipment with narrow body equipment on a single pairing. Take a few minutes to think about the problems this will create, it won’t take you long to make a list of questions on how this will work or to identify where the problems will arise. For those of you who flew extra trips (chasers), you know what happened when something went wrong. The Company decided to abandon the extra position because it created more problems than it was designed to help contractually. Now, they want to embrace this concept on a greater scale and cite financial savings as a driving factor when history has taught them the opposite. The really upsetting move was that they decided to do this in December, and they gave no advanced notice to the APFA or to you, their employees. They just did it and tried to slip it in the bid package with 48 hours for us to catch it and review it. We did catch it and immediately voiced our opposition which only delayed the implementation because at that point it was to late. Your APFA Base Presidents and National Officers made our position very clear along with stating our disappointment with yet another decision being made based on an algorithm or statistical data rather than taking into account a human factor. We collectively sent the message that there are real people out here and it is time the company acknowledges this.

December is a challenging month for staffing and this year is no different. With the increased demand over the holidays, this causes massive amounts of flights to be added to the system for the second half of the month. It’s like comparing the flight schedule in February to the flight schedule in July and it happens almost overnight. This happens every year and to compensate, the company relies on the optimizer computer system to create trips that will cover the increase. The optimizer loves to spit out four-day trips that span over the actual days of the 24th, 25th and 31st. We have always advocated for the company to break these trips into two days and one days to help ease the stress of the holidays. The company did not consider our request and made more 3 and 4 days over this period. Overall, the one, and two days decreased, and the four days increased to 9% of the trips. Our trips break down as follows: 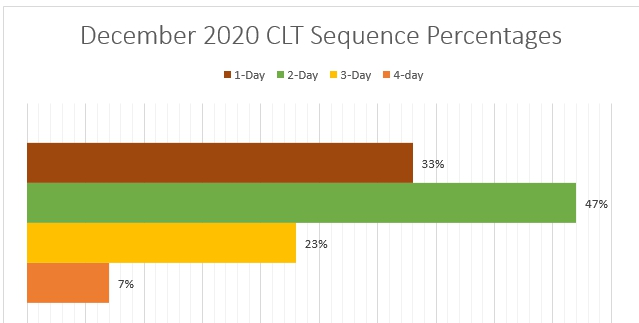 We will operate 7 banks of flights except Tuesdays and Wednesdays. Over the holiday period, we will be operating all 7 banks.

The high reserve numbers (26%) have pushed the seniority for rotation to March of 88. Historically they have also had high numbers in January also. This is pushing rotation to the highest seniority we have seen. To have high reserve numbers just to cover a fragile system is unacceptable. We have many of our flight attendants on sick calls related to the pandemic or are granted pandemic leaves for exposure. The country is seeing a rise in cases and constructing trips with multiple legs and longer duty days means a greater risk of exposure and is equating to a higher sick rate. With the trip construction the way it is, this becomes a self-fulling prophecy, the trips will fall apart, and more and more people will be placed on the sick list. The only solution the company will consider is increasing the number of reserves. This past summer, APFA allowed the company to implement a change to the reserve days off bidding process where a flight attendant can do a “look back” into the previous month when bidding days off at the beginning of the current month. This was allowed because we knew it would benefit some of the reserves and we were also promised lower numbers of reserves. Several changes have happened in the past two years that gave the promise of lower reserve numbers and we never saw the benefits. When we asked about lower numbers for the reserve count as a result of these changes, the company could not provide an answer as to why these measures did not reduce the reserve percentage for December. They replied that they were in JCBA compliance with setting the reserve numbers and the line average. In other words, because they can.

The mixed trips that may contain a leg on a wide body aircraft are listed as:

Charlotte has 179 Flight Attendants qualified on the 787. Keep in mind when you are bidding for these trips, you must be qualified on the equipment or you will not be awarded the trip. You may also be awarded the trip in one position and for the wide body leg be in another position, this will affect any premiums you have for the trip. We are working on getting a list of where the other FAs will be coming from if you need to track them for any delays.

Some of the things we did see in the bid package include the usual island destinations and some South American routes we will be flying out of Miami. LHR will run Sun-Wed-Fri and there was no extra-long layover for Christmas as we have seen in the past. Most of the pink-eye flying has been built into the 3 days. There were a few more rocket trip destinations. ODAN numbers were down, but the percentage of overall flying remains the same. We saw more 2/3 days with 30+ hours in SJU, PWM, STL, STT, MSY, CLE (holiday), and MEM (holiday). We did see 5 leg days, but very few, most days have 3 legs and yes, the 2 to 3-hour sits are still there. There was an increase in 4 days, not all of them were commutable. The 4-days were added to the schedule with the increase in flights over the holidays. There are some gems in there for 2 and 3-day trips, you just have to dig for them. For those of you who normally bid generic, it may be worth your time to bid specific in your first few layers. If you are not used to bidding specific, be careful not to mix generic preferences in the specific layers as this will confuse the computer and kick out the whole layer. The overall trip construction was not as bad as October and many of the trips looked similar to November trips.

Reminder: PBS bidding opens on the 10th and closes on the 15th.

A couple of other quick reminders. Don’t forget to fill out the “well for work” on Comply365. Also, there are three (3) training modules due at the end of the month. The FAA is stepping up check rides specifically looking to see if your tablet is up to date and the batteries are charged. If you are having problems with your tablet, have the Flight Service Center take a look at it and if you are still having problems, file an ASAP report.

We are disappointed with the direction the Company continues to follow during this time of crisis.  With the holidays coming and all the usual stress that accompanies it, along with the stress of a global pandemic, furloughs and an uncertain future, know that your Charlotte team is here to help with anything we can. The APFA will continue to fight for your safety, well-being and quality of life.