Each year, the Company creates the annual vacation matrix outlining the distribution of vacation days allotted based on the number of Flight Attendants. JCBA Section 8 – Vacation guides the parameters used for accrual, pay, bidding, awards, trades, and vacation buyback. The Contract states that the Company shall offer a minimum of 5.5% of the vacation days for buyback. In the past, the Company has always granted buyback to anyone who requested it.

Each year, APFA and the Company meet to discuss the vacation matrix, and Base Presidents make recommendations to improve the matrix. The meeting took place this week. Here are some of the details:

As you can see, the Company is meeting the minimum requirements for July, August, and December with 4.5%. June was the only 3.0% contractual minimum month.

The actual matrix displays the number of days allotted for the entire fiscal vacation year, broken down per day by bid months. The surprise to this year’s matrix was the amount of vacation placed at the end of the vacation year, in February, March and April of 2022. This was a major shift from previous years. The Company explained they needed to keep vacation days available for the Flight Attendants who will be returning from the 15-month EVLOAs next year. They want to allocate any costs/payments to as late in the year as possible. We advocated this time be moved to other months such as May, June, July, and August, but the Company firmly declined our requests. September and October were about the same percentage as previous years, with the largest decrease year over year coming in November with a 4.9% reduction. The Company remains very stern on the 4.5% in July, August, and December. We always ask for more time in those months and may get a few days moved. However, the Company protects these months, which is why we have a higher minimum percentage built into the contractual language.

With our Company’s financial situation, they have tried to push the vacation to the latest part of the year to get in a better financial situation to pay these hours. The cost of vacation for the available Flight Attendants is a fixed cost for the Company, and they know they must pay this. The amount is the same over the whole year (given a few factors), and we communicated that pushing payments is not fair to our workforce. We advocated moving that time to other months in the year. They refused to move any time to spread it out.

We sent our requests to move certain vacation days within the same month. For instance, one day in a month may have 137 vacation slots available for bidding. Just a few days later, there may only be 105 slots. We asked for some of those days to be moved to even out the grid, but you can often see where the lower available days for bidding fall over official holidays or unofficial holidays such as the Super Bowl, Mother’s Day, Father’s Day, or Halloween. Some are unique holidays to the base itself, such as a NASCAR race. There are fewer days available on the weekends than on weekdays. The Company did agree to move some of the days around in August to help smooth out some of the peaks and valleys. They did agree to move some vacation days from the beginning of December to the holiday period and moved some vacation days from the end of January to the first few days, including New Years’.

The annual buyback creates a unique situation that did not have a big impact this year due to the lower number that was offered. When someone takes buyback, the number of days they would have been awarded are removed from the grid. The Company makes the decision where the days are removed. We have asked that the days remain in the grid for the initial bid and removed after the first round of vacation. This would serve as a boost to seniority when bidding vacation. If someone senior to you takes the buyback, you could then bid on those days. We have also asked that a certain percentage of the buyback days be left in place for the summer months, but the Company is taking full advantage of the buyback clause and removing those days where it is most beneficial to them.

There is also something that used to be called the “Holy Grail” of vacation where only the most senior Flight Attendants could hold it. This is seven consecutive days, but over two months—for example, three days at the end of March and four days at the beginning of April. The pay would be four (4.0) hours per day, but the time is placed over two months. Last year they were very receptive to “smoothing” out certain months, and many more Flight Attendants were able to hold this. We requested this again this year but keep in mind; there are several months this is not possible due to a holiday. December to January will be limited due to New Year’s, The end of June and the 4th of July, Memorial Day, Labor Day, etc. We pushed for more smoothing in February to March, March to April, April to May, and September to August. While they did not take days out of one month and move it to another, they did move the days in December and January closer to the holidays. They did not consider our requests for smoothing from February through May.

Overall, the matrix was extremely restrictive this year. The Company is making every effort to conserve cash, and this matrix reflects this. We have a reduced headcount due to the leaves of absences, and a large portion of the furloughed Flight Attendants who have returned elected to receive a cash payout for their accrued vacation. The Company had to pay out lump sums for sick and vacation to some of the retirees, with others receiving these payouts next November. They held fast to the contractual language concerning vacation with cash as their main concern when making operational decisions.

The outlook for the Company remains guarded. The pandemic is still driving where we will end up, and the Company is being very cautious on where they plan to move the operation. They had an aggressive plan, but it looks like they are now moving forward with caution. 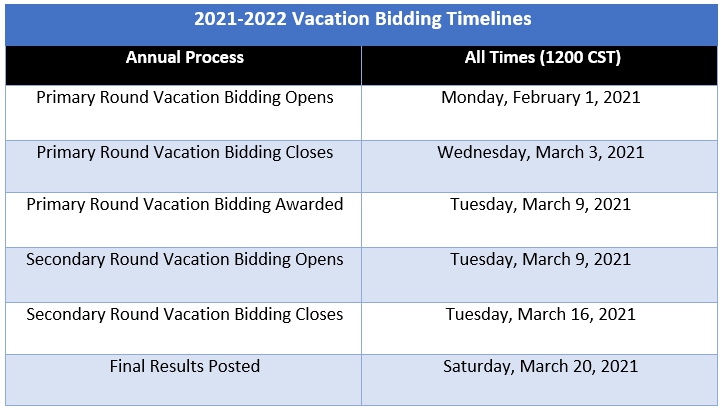 Take care of yourselves, and each other. ~ The Charlotte APFA Team