Throughout the year, APFA strives to honor and celebrate America’s diversity. February is a time to celebrate the Black community’s contributions and an opportunity to pause and reflect on the accomplishments of Black Union Leaders and Activists.

The origins of Black History Month trace back to September of 1915 when Harvard Ph.D. graduate Dr. Carter G. Woodson and minister Jesse E. Moorland founded the Association for the Study of Negro Life and History (ASNLH). This organization sought to promote achievements by Black Americans. In 1926, the ASNLH, now known as the Association for the Study of African American Life and History (ASALH), began sponsoring a national Negro History week in February to coincide with the birthdays of President Abraham Lincoln and Abolitionist Movement Leader Frederick Douglass.

History is rich with Black Leaders who have stood up in the name of equality. This month, we recognize two Black Leaders and Activists, Diann Woodard and A. Philip Randolph, who fought for racial justice and equality within the Labor movement.

Born in 1951 and raised in a UAW family in Michigan, Diann Woodard attended Michigan State University and quickly found her niche as an educator, counselor, and later Assistant Principal in Detroit’s public school system.

Almost immediately, Diann became active in the Organization of School Administrators and Supervisors, Local AFSA 28. She was appointed Vice President of her local Union in 1998 and served three consecutive terms as President. In 2009, Woodard was elected President of the AFSA after 16 years of serving on their Executive Board.

Throughout her tenure, Woodard worked tirelessly to improve students’ access to quality education while tenaciously advocating for teachers and administrators. In addition to her work as an educator and AFSA Union Leader, Woodard served as Vice-Chair of the Committee of Women Workers, which sought to advance the roles of minorities and women within the Labor movement.

Woodard passed in 2018, and the Diann Woodard AFSA Scholarship was set up in her memory. Each year, five children of AFSA members are awarded scholarships to pursue secondary educations. Woodard’s contribution to the protection and advancement of inner-city students continues today.“For over nearly four decades, Diann Woodard fought to give Michigan’s children a better future while fighting for justice and rights for teachers and school administrators,” said Richard Trumka, President of the AFL-CIO, where Mrs. Woodard served as a member of the Union’s Executive Council.

“America’s labor movement has lost a champion, an exemplary leader and educator,”Trumka said in a statement. “And I’ve lost a friend.”

An influential leader in the struggle for justice and equality for Black Americans, A. Philip Randolph began organizing efforts at an early age. In 1925, Randolph organized and led the first predominantly Black American Union, the Brotherhood of Sleeping Car Porters (BSCP).
Over the next 10+ years, Randolph led a lengthy and challenging campaign to organize the Pullman Porters. Despite incredible opposition, he was successful in forming the first Black Trade Union by 1937. 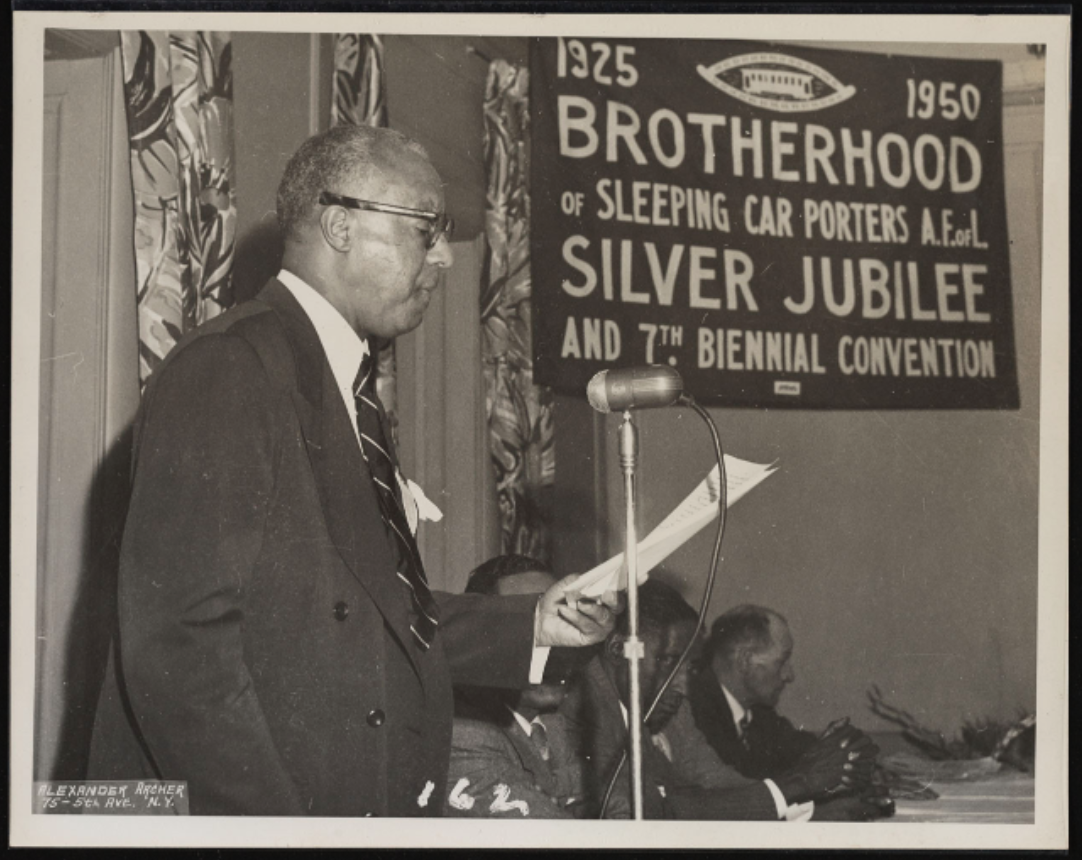 A. Philip Randolph giving a speech at the Silver Jubilee and 7th Biennial Convention of the Brotherhood of Sleeping Car Porters. (photo source: Dellums (Cottrell Laurence))

Despite many of the American Federation of Labor (AFL) affiliates barring Black members, Randolph took his Union into the AFL. Seeing that their Leaders refused to fight discrimination, Randolph left the organization and took his Union to the newly formed Congress of Industrial Organizations (CIO).

Randolph was active in the peaceful protests and Civil Rights Movement of the 1960s. In 1965, Randolph and fellow Civil Rights Leader Bayard Rustin founded the A. Philip Randolph Institute, an organization comprised of Black Unionists to promote racial justice and equality.

“Equality is the heart and essence of democracy, freedom, and justice, equality of opportunity in industry, in labor unions, schools and colleges, government, politics, and before the law. There must be no dual standards of justice, no dual rights, privileges, duties, or responsibilities of citizenship. No dual forms of freedom.” ~A. Philip Randolph

Labor Unions have always stood at the forefront of the quest for workplace equality, regardless of race, gender, or sexual orientation. We pause to reflect on all Black Americans’ contributions in the fight for justice, racial and gender equality, and inclusivity for all.