Miami’s total block hours for March are 127,919. This is an 8.7% increase from February. We are still down 43% from the same period last year. The increase in block hours represents the gradual return of our flying. We expect this trend to continue.

At a Town Hall Meeting yesterday in Miami, Vasu Raja, VP of Revenue, announced Miami will start service in June to Tel Aviv (TLV) Israel, and Paramaribo (PBM) Suriname. Given that 50% of Israel has already been vaccinated, Mr. Raja indicated there would be numerous opportunities to connect Israel to the Caribbean and Latin America. He also said we can expect more wide-body flying. This will include MIA-LAX four times daily on the 777-200, double the number of seats in Columbia, deploy the 787 where there is demand including short haul, and the 737 Max having more long-range opportunities. Mr. Raja stated, “We are playing to win.” He further said that American has made clear its commitment to Miami with local government officials. He is confident there will be a recovery, and Miami will play a significant role in that recovery.

We will see a 6% increase in 4-day sequences primarily due to co-pairing with the Pilots on the 737 Max. All other sequences will have similar percentages to the February allocations.

Here are the staffing numbers for March, and the composition of trips: 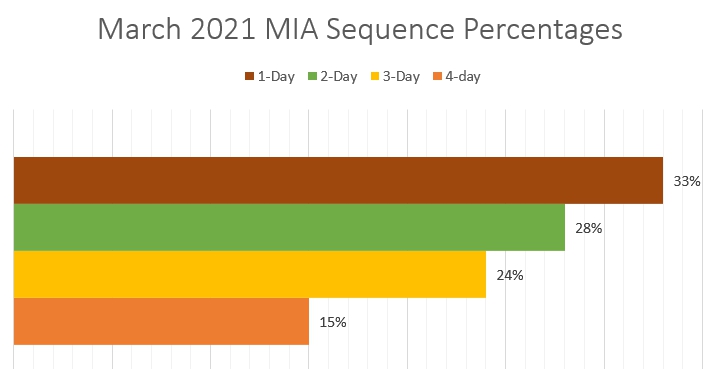