We continue to see an increase in block hours which is a trend we expect to see in the coming months. There is a real sense of optimism with future bookings on the rise, and our nation starting to experience an economic recovery.

The Company is still struggling with being able to forecast the manning numbers. Bids and leaves have been delayed due to stringent governmental requirements to many of our foreign destinations. Fortunately, we have been able to secure sequence pay protection for COVID cancellations that extend beyond the contractual provisions in the JCBA, in exchange for delaying the timetable for PBS, TTS, and ETB. We hope to continue securing this pay protection for the upcoming months.

The Reserve numbers showed a sharp increase for April, up 4.2% from March. They attributed the increase to a high volume of lost time in February. I shared my concerns with the Company pointing out the historical data does not support 21.1% of our base being on Reserve, and February should not be the metric used to determine the Reserve numbers for April. They agreed and indicated they would reevaluate the numbers in 30 days.

The 787 will have a variety of International turns including UIO, PAP, SAL, MDE, and GYE.

The sit times have improved on the narrowbody flying, but we will still see many three leg days due to so many short hops out of Miami. There will be significantly less 4-day trips since we will no longer be co-paired with the pilots on the MAX.

Here are the staffing numbers for April, and the composition of trips: 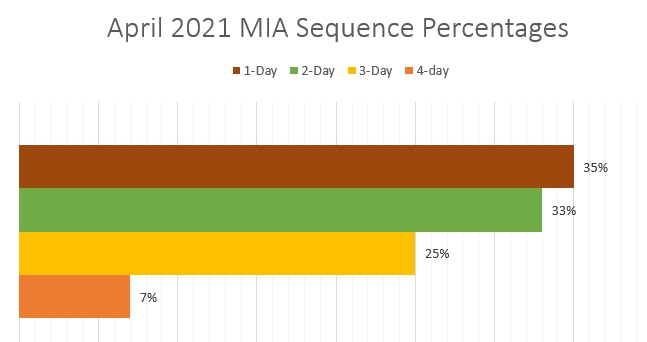