We had our monthly call with the Company this week to discuss the trips and staffing for April. We saw an increase in the amount of flight hours in March by almost 20% and there is another increase in April of almost 6%. The Company has stated they anticipate these flying increases to continue into the summer as COVID cases continue to decline and the vaccine becomes more readily available. The bookings are increasing, and they believe the demand for air travel will increase. American anticipates adding more flight to its schedule, both internationally and domestically as the demand comes back.

With the return of our furloughed Flight Attendants, and the passage of an additional stimulus bill, they foresaw problems with the staffing model they had planned for in April. As a result, they modified the start date for the EVLOA-2s from April to May. This created a situation that theoretically called for the need to offer VLOAs in April. The dynamics of how they planned to accomplish this were not fully vetted by the APFA before they made their announcements. We protested to a contractual variation and the terms of the VLOAs were modified. The result was only five (5) Flight Attendants were awarded an unpaid VLOA for April in Charlotte and the Reserve numbers have increased. Roughly 600 Flight Attendants were awarded the unpaid VLOAs systemwide for April with over 1400 requesting a leave. Those who would have started or extended to a leave in April now have to wait until May. The numbers for the EVLOA-2s will be determined by the staffing needs of the of summer schedule. With planned flying increases for the summer, the number of EVLOA-2s that are awarded will be drastically impacted.

Here is how our base breaks down:

The Reserve number for Charlotte is almost 7% higher than the average for all the other bases. This is unacceptable, while most of the Reserves will be Flight Attendants returning from furlough (roughly 243), this high number will affect our rotation schedules making it harder to plan anything from your summer schedule to bidding vacation for next year. Why the high numbers in Charlotte? The Company said it is based on usage, that we have higher sick rates than the other bases and we are using our reserves because of the fact that other base trips may break when passing through our base and that time has to be covered by CLT reserves. We do monitor the sick rate and this excuse doesn’t add up. They won’t share the COVID rate, but we know the number of COVID removals has drastically decreased. It makes more sense that the high usage numbers are directly related to the fragile nature of the trip construction itself. We had major weather events happen in the last 2 months and we burned through our reserves as a result. Now our flight attendants have to pay the price for poor planning and utilization. Easter falls on the first weekend of the month, so this caused a natural increase in the reserve numbers, but not enough to justify the large numbers. There are 5 Tentatives; this number is directly related to the number of unpaid VLOAs and anyone slated as a tentative will not be on reserve as the unpaid VLOAs have already been awarded. PBS bidding may change the Reserve numbers slightly, but it looks like the cut off for Reserve will be May 31, 1998.

The line average has been lowered to 76, which is almost as low as they are allowed to go. When you look at the numbers it looks like we have an overstaffing issue for April, and they solved it by lowering the line average and placing more people on reserve. We advocated for more VLOAs to offset the overage, but the Company stated they needed the additional Reserves for other reasons but the additional 10% personnel and only a 6% increase in flights directly correlates with the 4% increase in the Reserve count.

The trips break down as:

There were very few changes to the distribution of trips and small changes to the actual construction. The 1-Days remain strong but there are still 4-leg 1-Days. We continue to advocate for 2 quick turns with a short sit in between the turns, but the computer wants the trip to be a hard time trip, so it keeps forcing a quick turn with a medium turn. The sit times have slightly decreased, but the majority are still there. The high time turns to the west coast are still there, but the number of these trips remains the same.

Overall, our trips still have long sit times when you pass through a base but the sits of greater than 3 hours has been reduced. Again, a slight improvement but not a complete reversal of the trip construction model we have been dealing with since October.

The2-Days remain the same with a mix of departure times that make it more realistic to do back-to-back trips. The 2/3 days are reducing as the schedule comes back. When they add flying, they may add banks of flights to a base. We will have an increase to 9 banks of flights (8 on Tuesdays and Saturdays), but Chicago may have 5 banks. With the addition of time to the system, Chicago may now have 6 banks of flights.  This may add service to a low frequency destination and allow options for the manpower and planning department to keep a trip flowing instead of having to provide a 30-hour break because there is not another flight out of that city you are qualified to work. The reduced schedule has created this problem that will slowly eliminate itself as the schedule comes back. The 30-hour layovers include:

The 3-Days have little changes to those we had in March. The 4-Days had a slight increase in number coming in at 11%. About 42% of the 4-Days are non-commutable on one end or the other. We continue to push for commutability on the 4-Days to make them more desirable to the commuters.

The surprise was the addition of a SEA to LHR 6-day trip. This flight from SEA runs 3 days a week as a passenger flight and 4 days as cargo. The passenger flight was divided among 5 bases and we landed one of these flights once a week. The CLT-LHR flight will run seven days a week in April. There are no updates on any of the other IPD flights out of Charlotte or RDU at this time, the Company is still watching the bookings and there are still restrictions to many countries. NIPD destinations remain popular with our passengers and the seasonal increase will be spread amongst several bases. We will have a healthy number of NIPD trips going into the summer.

We want to send a reminder to everyone when bidding in PBS to really look at the trips. There were a few people who bid RDU satellite trips by mistake. If you use an outside app to view trips, it may not have a designation on the RDU trips showing them as satellite trips. When this happens, it creates a problem trying to drop or trade the trip as there are no reserves in the satellite. The trips will not populate in PBS unless you select co-terminal, but they are listed in the general bid package of trips. 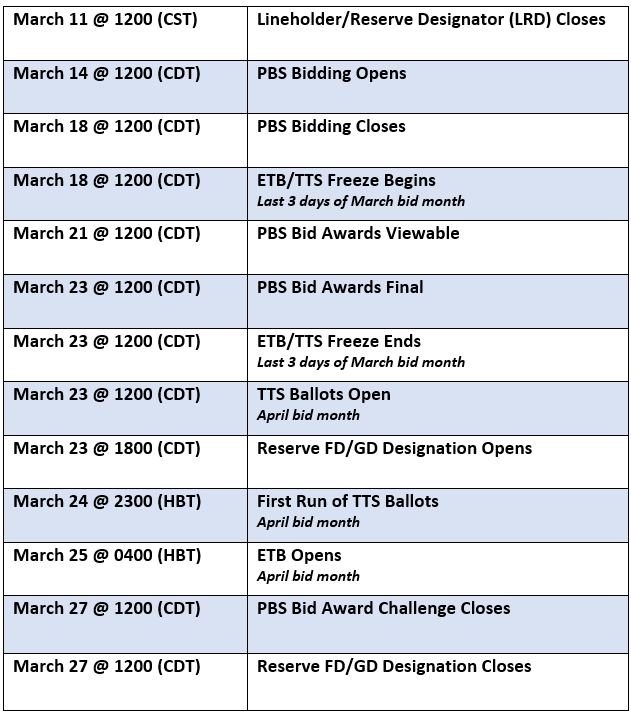 We continue to see growth to the system which is the best news of all. While this has been a year of drastic change, we have adapted very well to the upheaval. We all should remain optimistic that we are hopefully moving in a positive direction to return our operation to the levels we were accustomed to just a year ago. The Charlotte APFA team is here to fight for you and support you no matter what path we end up on.