We had our calls with the Company this week concerning the schedule for May. Two months ago, the Company had told us there would be increases to the system in the next few months, and they would not be granting the new leaves. We asked what month, April? May? June? They could not answer. They were bringing back all the furloughed flight attendants but said the planned increases meant we needed all hands on deck, but what month? Well, we saw a slight increase in March and April, but it looks like that’s it until, maybe June? I’ll leave the rest of this speculation to you. Is COVID over? AA is quickly moving in that direction as Europe and Canada go on lockdown and South America hits new peaks. You can draw your own conclusions on that one also.

So, how does May look? Charlotte continues to operate nine banks of flights which have been our strong point for several months now and been a driving force on many levels. Many of the bases were operating on five banks and are finally getting additional banks added in May. This has caused a system increase in man-hours, but we saw about an 8% drop in the total number of trips. Our man-hours may be listed as even from April, but that is because we picked up more long-range flying. Our total trips have decreased. May looks very much like March and April, with a decrease in trips but an increase in the Reserve count.

The Company is stating the increase in Reserves is due to the two holidays (Memorial Day and Mother’s Day) falling in May. The numbers were unacceptable in April, and they are unacceptable in May. 25 and 26% of the base being placed on Reserve are numbers we would traditionally see in December/January and July. We have asked for usage numbers, but the Company provides them quarterly. By driving up the Reserve numbers, the cut off will be at seniority of March 27, 1988. With people returning from leaves and the last of our furloughed Flight Attendants returning having to sit Reserve their first month back, the Company does not see a problem with higher numbers. This is the problem; we know from history they will want high Reserve numbers in July. By pushing the numbers higher now, the seniority in July will be even higher than we have seen in past years. They are only looking at the 3-month cycle to see if they will mathematically run out of Reserves on a one on three off cycle. Remember, if you bid down in May you will be guaranteed the summer as a Lineholder. Keep in mind the amount of vacation you have in May will affect whether May will count as your Reserve month. With no caps or controls on Reserve numbers, we can only protest the high numbers.

The only surprise to our trips is the addition of a daily flight to Honolulu beginning on the 6th with an easy positioning trip on the 4th. If you stay on east coast time, it’s basically a red-eye but who wouldn’t want a long overnight on tropical beaches. LHR will continue with seven daily departures. No word on the lifting of the hotel restrictions, we saw Caribbean trips holding strong. There was also a good number of long layovers in low frequency cities such as CLE, ORF, RIC,CHS,MEM and MCI. These are in the form of a 2/3 day or a 3/4 day. The sit times/connection times are still there, although there was a 20% reduction in sitting over 3 hours. The ratio breaks down as follows:

The remaining sequences are the 2/3 and 3/4 days with 30 hour sits. These remain the most unproductive trips because they have synthetic or rig time. Rig time is the one factor that drives the budget. With many small cities only receiving service intermittently during the week, these types of layovers are sometimes unavoidable.

There are still 4-leg 1-days with a sit in between the turns. The sit time has been reduced, but they are still there. 2-days make up the bulk of the trips with a large reduction in the 3-days. The 4-days are healthy trips, but the commutability has not improved. Traditional red-eyes were the best surprise, but most red-eye flying is still being built into the 3- and 4-day sequences. We continue to ask for the separation of this flying and it seems to be slowly happening, but the synthetic/rig time will be the driving factor on trip construction. The SEA LHR is no longer operating as a Charlotte trip for May.

RDU has about the same amount of time it had in April with a reduction in the 4-day trips. We have asked for an elimination to the 4 days in RDU and have been told that is one of the goals. No word yet on LHR running out of RDU. We still saw some of the RDU trips with layovers in CLT, it does not make sense to have overnights in the “mother” city and these have been reduced.

While the rest of the system enjoyed healthy increases and major changes to their trips, we have remained stagnant with our numbers in CLT. Any improvements were modest tweaks, but we will take what the system can provide. We have had the nine banks of flights for some time, so any major increases will come when they add large amounts of flying to the schedule. Maybe July?

There will be some changes to the bid timeline as follows: 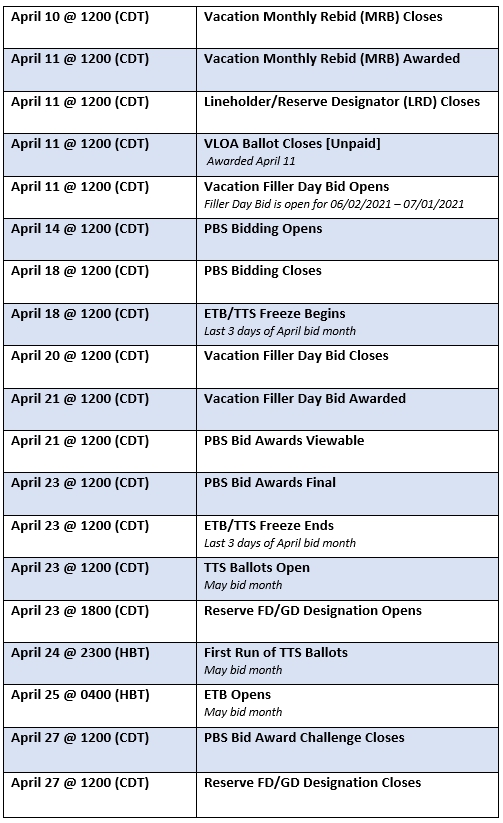 All in all, we are playing the waiting game to major recovery. The bookings continue to grow domestically with a cautious eye on IPD opportunities. We welcome back the last group of our furloughs and those returning from leaves. We have been re-tooling the local APFA structure and look forward to new ways of getting your feedback and providing information. We remain optimistic for a recovery, and we want to make the positive changes needed to serve our members.