Throughout the year, APFA and Unions across the country celebrate and commemorate the diversity of our membership. During May, we recognize the contributions of Asians and Pacific Islanders, specifically those from the Asian continent and the Pacific islands of Melanesia (New Guinea, New Caledonia, Vanuatu, Fiji, and the Solomon Islands), Micronesia (Marianas, Guam, Wake Island, Palau, Marshall Islands, Kiribati, Nauru and the Federated States of Micronesia) and Polynesia (New Zealand, Hawaiian Islands, Rotuma, Midway Islands, Samoa, American Samoa, Tonga, Tuvalu, Cook Islands, French Polynesia, and Easter Island).

The month of May was chosen to commemorate Asian/Pacific American Heritage Month for two reasons: the arrival of the first Japanese immigrants to the United States on May 7th, 1843, and the completion of the first transcontinental railroad on May 10th, 1869.

A Profile in Courage: Philip Vera Cruz and His Contributions to the Labor Movement

Born in the Philippines in 1904, Philip Vera Cruz moved to the United States in 1926, where he eventually became a farmworker. Between 1920 and 1929, over 31,000 Filipinos arrived in California in search of agricultural work. Many farmworkers at that time were Filipino immigrants, and the working conditions were grueling. Workers lived in labor camps in difficult conditions with little rights, no benefits, and meager pay. Vera Cruz participated in his first strike in 1948, organized by Filipino farmworkers who worked in the asparagus fields. This strike sparked the organization of Filipino farmworkers across California and was one of the first strikes that ignited the farm labor movement that followed. 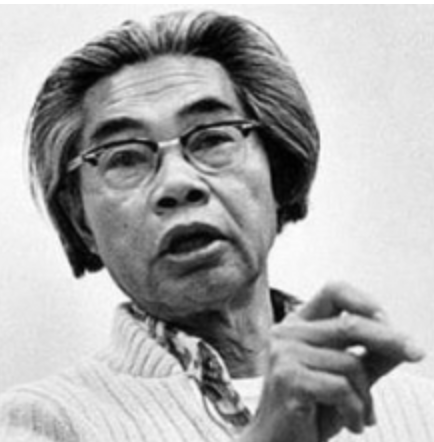 Philip Vera Cruz worked alongside fellow Labor Leaders Larry Itliong and Cesar Chavez. While many associate the Delano Grape Strike of 1965 with Mexican Americans, Filipino-American farmworkers started the movement, of which Vera Cruz was an early organizer. The Filipino and Mexican farmworkers merged their labor Unions to increase their power, forming the United Farm Workers (UFW) Union in 1966.

In 1975, Philip Vera Cruz became the UFW officer in charge of Agbayani Village, a retirement community constructed for farmworkers who worked all their lives with little to no savings.

“My life within the union, my life now outside the union, are all one: my continual struggle to improve my life and the lives of my fellow workers. But our struggle never stops.”
~Philip Vera Cruz

Today, over 24 million people identify as Asian or Pacific Islander in the United States. These citizens have helped shape history and society and have had their lives dramatically influenced throughout our country’s history.

We pause to reflect on the contributions and achievements of generations of Asian Americans and Pacific Islanders who have and continue to enrich the fabric of the United States.