We received the staffing numbers today, and to say once again, I am disappointed at the Reserve numbers, is an understatement.

Last month it was five weekends and Mother’s Day driving the numbers up, not to mention not enough VLOAs. For June, the explanation I received is high sick volume and the number of Flight Attendants removed for vaccinations. I am just reporting what was told to me, and I am not buying it. I told the Company these numbers were inflated and were not consistent with the historical data. I made it very clear that we should not see a 5% increase from June of 2019, and a 6.5% increase from June of 2018. Clearly, the targeted hours are too low, and in my opinion, to blame it on the sick volume and vaccinations is not only inaccurate but disingenuous.

In June, our block hours went up 23,000 hours from May. This represents a 15% increase. There will be a schedule change on June 2nd, so keep an eye on your carry-over sequences originating in May. We will see an increase in wide-body flying both in the Domestic and International operation.

GRU will operate daily on a 777-200 with a 40-hour layover. It will be paired that way through the summer. Due to a frequency change, GIG will operate as a Rocket three days a week on a 777-200. This is a change from my previous communication in May. It was not possible to build GIG as a 4-day trip. It will remain a Rocket through the summer unless the trip operates daily.

The 777-300 will operate two daily Transcons to LAX, and daily turns to DFW and JFK.

Here are the staffing numbers and trip compositions: 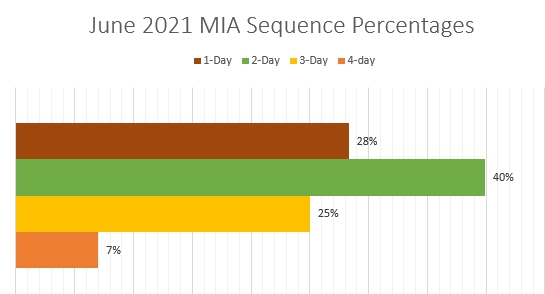