We had our monthly call with the company to discuss the trips for June. We had an increase in time, but the distribution of trips and the basic construction of the trips remains the same. The most disappointing news was the reserve number set at 541. We have been warning of the domino effect high reserve numbers would have on the upcoming months, and now the cut-off seniority for reserve is 1986. This has a devastating effect on our Flight Attendant’s ability to earn money, plan events, take vacation and have flexibility at any seniority. Our RDU satellite base is struggling to fill trips as most of the people who live there are now on reserve rotation. The decision to keep the high reserve numbers for the spring has now impacted the summer months.

Here is the breakdown for CLT:

The Trips have a distribution about the same as we saw for May, there are just more of them in each category:

The largest change was a large increase in 4 and 5 leg days. It seems they have added time to the existing trips by making them more productive. There were 4 categories we wanted to see improvement on: long duty days, multiple legs in one day, 3-hour sits, and the commutability of the 4 days. We saw no improvement in any of these categories and actually they are worse in many ways.

The majority of the one days were 4 leg days with a long sit in the middle. If they get rid of these trips, it will drastically reduce the number of one days.

Two days make up the bulk of the time, yet more legs have been added and the first day tends to have a long day followed by a short rest.

There were slightly more 3 days, but the multiple legs were added here also. There is a Denver red-eye where you have to work 4 legs just to get there.

Almost half of our 4 days are not commutable on one end or the other.

The sit or connection time of 3 or more hours is there in only 8% of our trips, but the 2+30 to 2+45 hour sits seem to be a staple of trip construction.

As you can see, this is not the direction we want to see and there are no plans to back off and improve any of these categories.

The 737 MAX time will continue to grow with the grounded aircraft scheduled to return to the fleet. We are pulling out most of the grounded aircraft in general as we return time to the system. Wide-body aircraft are being used for many of our domestic flights. While adding flights back to the schedule is the good news we have been waiting for, the brutality of the trips puts a strain on our workgroup.

There will be no VLOAs for June as we have a big jump in time, and they need more people to cover the system. In theory, the increase in time should create more lines, but they seem to want to cling to high reserve numbers. The month of July starts on the 2nd, but the critical period begins on the 1st. They put more reserves on in June to cover the 1st of July?

The company has said the high reserve numbers are due to a high sick rate amongst reserves, yet they have not provided the data. We have had high reserve usage in the past few months and they keep pointing the finger at the reserve sick rate. They fail to see the vicious cycle they have created with brutal trips that are fragile in nature and bust with any weather events around the system. With Charlotte having nine banks of flights, they are more likely to split broken trips from other bases in Charlotte when they can. Many of the split trips are not red-flagged and not on the UBL for very long before calling out reserves. While Covid vaccinations have increased the sick rate, this has to have less of an impact than the 10-day quarantine we had at the peaks of the pandemic. Fatigue is a real factor when building long duty days followed by a short overnight and the continuous usage of the reserves for long stretches has run our reserves to the brink. The reserve system was never intended to be the staple for coverage and 27% is way too high. When this system was put in place, 15% was predicted to be high. Just a year into it we were told 20% is the “new norm”. Now 27% seems to be the tipping point where you have to wonder if they will run out of bodies to fill the reserve spots when everyone goes on a 1 on-3 off rotation. If the current pattern continues, this is a real threat. If it comes to that, they will pull flying from the base for a month until the rotation resets itself. With all the changes we have made in the last two years, generic bidding on the UBL, the reserve lookback for bidding days to name a few, none of these moves has made any impact to the reserve percentages. When the reserve system is the crutch used to cover 30-40% of your trips, something is wrong. Adding late sick and more discipline to make it twice as hard for reserves to actually use their sick time doesn’t seem to be working either. Maybe it’s time to look at the system overall and stop blaming the Flight Attendants.

The timeline for bidding will be as follows: 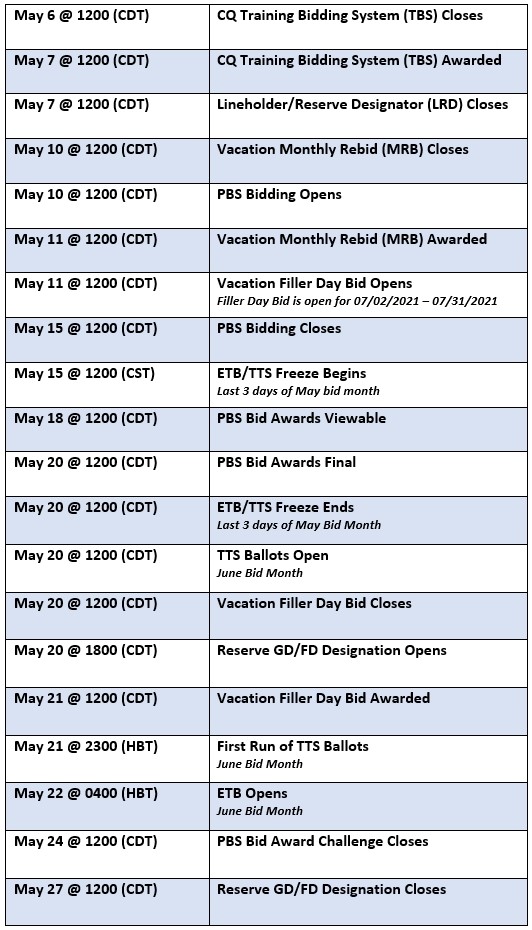 RDU Satellite trips have had a slight decrease in time as the high reserve numbers in Charlotte have placed a strain on the staffing for RDU trips. There are no 4 days out of RDU, and we asked for a variety of departure times making it possible to fly back-to-back trips. It’s not possible to relax any caps for the satellite apart from Charlotte. This has limited high-time flyers from being able to pick up more satellite time. If you live in this area, please take a look at the trips for RDU. Much like Charlotte, there are some decent trips as well as some stinkers. We will continue to seek improvements to the RDU trips, but much like the rest of the system, improvements will come as the system increases and the staffing is rightsized. We are committed to having a successful satellite operation in RDU.

All in all, there were little changes to the structure of the trips over May. We still have some gems tucked in there and we still have a variety that some of the other bases have not seen in over a year. The only new destination we saw was FCA (Glacier Park, MT). Last year in June we had almost 45,000-man hours and were way over staffed. This year, we have almost 114,000 hours and need all hands on deck. We are a long way from the 150,000 hours we had the year before Covid. The PSP money is still there, and no one can predict where we will be in a few months or a year from now. It’s too early to declare the pandemic over, but the bookings are picking up and the company is eager to get back to business as usual. We welcome the return of the flying but have concerns over how we are proceeding. The more things change, the more they stay the same. Much like last year at this time, you need to expect change and adapt to the environment. Above all, protect yourselves and remain vigilant to safety.

Take care of yourselves and each other. ~The Charlotte APFA Team