We had our monthly allocations call with the Company over the weekend to discuss the trips for August. We have seen the peak of summer flying in July, and August will begin the fall reductions. There are two schedule reductions slated for the 4th and a larger one on the 17th. Charlotte will keep nine banks of flights except for Tuesdays, Wednesdays, and Saturdays. As a result, we are only losing about 500-man hours, so expect to see more time and trips to bid on in the first half of the month.

Our numbers break down as follows:

We will have a total active headcount of 1,959. There will be 1,473 Lineholders and 485 Reserves (24.8%). The line average will be set at 80.6 hours. We will have 10 people returning and 2 transfers. These numbers look very much like the numbers we have seen in June and July. There will be no VLOAs for August.

Pink eyes, red eyes, and Bullets will make up just under 1% of the flying for each category.

IPD will have LHR daily. The SEA-LHR is back but will be flown by PHL crews for August.

The 1-days have slightly increased. There are still the 4-leg one days with the sit time in the middle. We have argued against dropping the sit time, but the Company maintains they can’t cut sit times from one type of trip. The long, high time turns remain intact for August and there are still the Caribbean flights. Our NIPD cities include HNL, PLS, MEX, CUN, PUJ, CZM, MBJ, GUA, AUA, NAS, STI, STT, SAL, PTY, UVF, BDA, SXM, GDL, BAQ, BZE and KIN. Some of these are turns on some days and built into other trips on other days.

The 2-days remained the same at 41%. We continue to get calls from flight attendants that have back-to-back 2-days and, due to a delay with the arrival of the first trip, are illegal for the second trip. This is creating open time to the system and placing a strain on our Reserve usage. We have asked for staggered report times for the 2-days, making it easier to fly back-to-back trips.

The 3-days went back up to 12%. The holiday in July pushed up the 4 days, and now the number of 4 days has slightly dropped, this has created slightly more 3-days and 1-days. The problem with the 3 days is a large number of these have a pink eye built into them. We continue to ask for the red eyes and all behind-the-clock flying to be built into trips as stand-alone trips. The Company maintains the schedule does not support enough flights to build clean red eyes. There were not a lot of pure red eyes, pink eyes, and bullets in the packet. There were 2/3 days with 30-hour layovers in BNA, MBJ, ORF, CLE, NAS, SYR, GEO, ILM, ORF, BDL.

The 4-days still make up a large portion of our trips with 14%. All the bases asked for a reduction in 4 days. 40% of our 4-days are not commutable. Our 4-days are predominantly for commuters, making non-commutable trips counterproductive to providing variety for all Flight Attendants. There were four 3/4 days with 30-hour layovers.

The sit times or connection times are about the same. There were fewer 3+ hour sits overall. However, we had about 19% of our trips had over a 2+30 hour sit. These sit times create longer duty days, with almost 6% of our trips having 13-hour duty days built-in. These are the duty days that break with the slightest weather event. We have also seen an uptick in maintenance delays that are causing an increase in broken trips. All these broken trips are put into systems trips and flooding open time, with a good portion going to the Reserves. This is driving up our Reserve usage and increasing the number of Reserves each month.

Our Reserve percentage at 24% is less than we have seen in the last two months, but still high compared to the other bases where they have been lowered to 17 to 19%. The Company continues to blame this on sick calls, but our utilization tracking tells a slightly different story. Reserve utilization is always high in the summer, that is to be expected. May showed low Reserve utilization, which does not justify the 27% they had that month. June had high utilization numbers with 17 days of red flag trips being offered and the Company declaring critical ops. 44% of the trips assigned to the Reserves in June were systems trips, and they only exhausted the standbys on one day the entire month. The critical ops coincided with weather events, but only a few were weather events directly affecting Charlotte. The Company has integrated the entire system as one big base. This is compounded by the sits/connections in other hubs. For instance, you fly a leg to DFW, sit for 3 hours, and then launch off to Colorado Springs. You are flying a route that would have been historically confined to DFW as a turn. Now, all the bases fly all the routes. This is evident when you look at the large number of South American trips we are flying out of MIA.

This type of utilization may be more productive when operating on paper or in a computer program, but with our bases stretching out across the country, the odds of a weather event happening somewhere in the country are greatly increased. So, if there is weather in DFW and it goes down for a few hours, the entire system is now affected, it becomes difficult to isolate the disruptions to a single base. With an integrated system operating as one base, now several of the bases are negatively affected. This is the real world. Charlotte has nine banks of flights. MIA and DFW also have large banks of flights. With everything flowing through these bases in the integrated system, the crews are generally replaced in one of these bases when trips break. We call this a “catch-all” base, and more Reserves may be used in one of these bases to catch the broken trips from other bases. This is a driving factor in our heavy Reserve usage, and we feel it is one of the factors that are driving up the Reserve numbers here and placing more and more senior people on reserve. This is placing our flight attendants at a disadvantage, and part of the reason rotation has crept back to 1982.

We have also been studying the efficiency of the UBL. The average trip in June was on the UBL for 9 to 30 minutes and the percentage of systems trips was about the same as it was for the Reserves. We continue to see trips placed on the UBL, run quickly and sent over to the Reserves. We have had agreements with the Company in the past to hold a trip (if possible) so that the Lineholders have a chance to see it and bid on it. This went away with generic bidding. Generic bidding was supposed to reduce the Reserve numbers, but we have yet to see that dividend. We see scheduling rushing trips through the UBL and sending them to Reserves. The number of trips awarded to Reserves outnumbers the trips awarded through the UBL.

The four systems we use, PBS, TTS, UBL, and ROTA were designed to work in unison. When one of these systems is not used efficiently, the entire system doesn’t work as intended. The Company has changed a few things with the promise of restoring balance to the system. The Reserve lookback when bidding days off, generic bidding, and now Reserves will have the ability to grab trips off a rap under 2 hours when in critical ops. None of these has had an impact on the Reserve numbers in Charlotte. To say this is frustrating is an understatement. We will continue to press for accurate numbers that are needed to staff the system.

The timeline for August bidding is as follows: 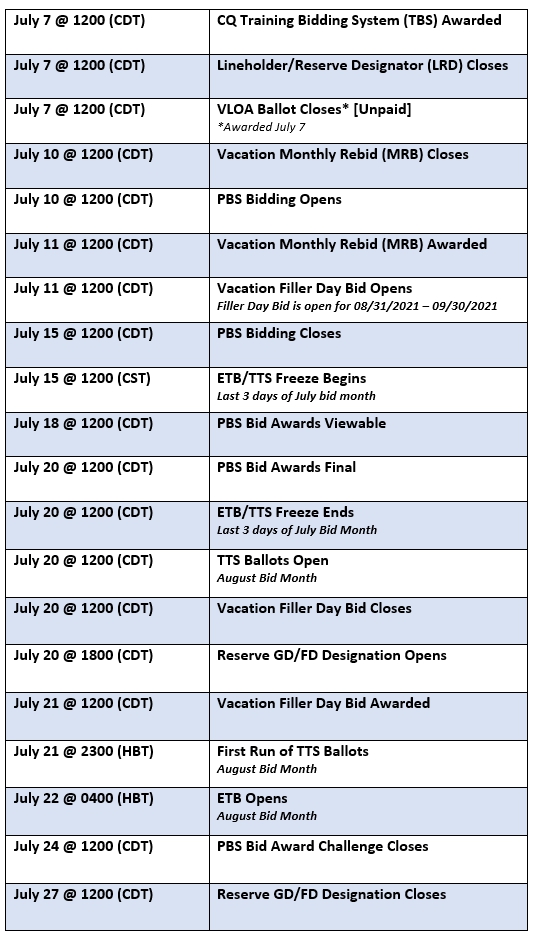 RDU Satellite flying has had a reduction in flying in order to ensure we can staff the trips. August will have a slight decrease of a few hundred hours. We are confident this is the right balance until the Reserve seniority stabilizes in CLT and LHR comes back. Your Satellite Coordinators met with the Company last week to air their concerns and push for improvements to satellite flying. The trips in RDU look much the same as July. We pushed for improvements to the departure times and asked for some more desirable overnights. RDU presented its case at the meeting, and we will continue to push for trips that work for everyone flying out of the satellite.

August will see the same amount of flying we have had all summer until the schedule change on the 17th. We will then begin the fall reduction in seasonal island and leisure destinations. We are hopeful the Company will use this reduction to take some of the pressure off the “productive” trip construction model we have had since last October. We remain confident the flying will continue to improve, and the industry will emerge strong by the years end. This summer has yielded challenging obstacles both within the Company and from our passengers. As demand returns, we are confident that we are on the road to stability and normalcy.