Yesterday, we had our monthly call to discuss the trips for December. Here is how it breaks down. The Company is reducing our CLT flying hours by about 10,000 hours. We will see about a 15% reduction in trips as a result. They are doing this because they cannot risk another staffing shortage and large amounts of cancelations like they saw over the Halloween weekend. The main reason is CLT’s consistently high sick rate over the last several months. They are pulling time from Charlotte and other bases that have high sick rates and redistributing that time to other bases that they say are more reliable.

The Reserve numbers are being raised to 701 (31.8%). It was anticipated that the Reserve percentage would remain consistent with past years at around 27%. However, the Company artificially inflated the numbers last spring and now are claiming the past few months have been artificially low. As a result, we are no longer using historical numbers or data to determine current numbers. The number is the number they set, and that is that.

New hire Flight Attendants will be joining our ranks in December and will not be included in the Reserve percentage. This raises our actual percentage by about 2% to 33%. Even with 97 Flight Attendants returning from EVLOA and 82 new hire Flight Attendants joining our ranks, the Reserve numbers will remain high in Charlotte. Before COVID, our numbers were high with an excuse. During COVID our numbers are high, and the excuse is sick calls. Last spring, we were told the high numbers were temporary, we warned of the seniority effect this would cause in the summer, but we were dismissed. Forget all the complaints on trip construction, long duty days, and inadequate rest. Forget that the system is fragile and breaks with a small storm, forget that hotels become scarce when the system breaks, forget that our bidding and IT systems crash regularly, forget that our work environment includes regular verbal abuse and assaults, forget that a global pandemic is still raging, forget that we still have a punitive approach to everything, forget that we have no support from our managers, forget that our contract is regularly violated. They want you to just come in and be happy in your work. The working motto of crisis managers is “things will be better in a few months”. We have heard this for three years now. It is evident that crisis or no crisis, this is the slogan we can expect as we move forward.

Here are our numbers for December:

With the slight improvements we saw in October carry over into November, we were confident December would show even more improvement. But with the Halloween massacre that just happened, the Company retreated back to their established/known game plan, business as usual. While we have been pushing for improvements to trip construction, the Company made small improvements in October and stayed on that course for November. It would appear they considered that an experiment and have chosen to go back to the construction model they used last year.

1/3 of our trips have high sit times. This is something we have been asking for improvement on, even before COVID. December trips have an increase in the sit times and more of those sit times are closer to the programmed max of 3+45.

When December rolls around, there is a massive increase of time due to the holiday. This extra time is usually picked up by the optimizer and built into 4-day trips. This increases the long trips that takes Flight Attendants away during the entire holiday. It also contributes to the assignment of unwanted trips due to coverage needed days. They did stomp on the 4-days to keep them down, but the optimizer pushed them into 3-days and 2-days. This year the distribution of the increased time was completely different. The month is not back-heavy, with the majority of time being pushed into the critical period. The increase in time is coming the week before. The major increase will start on the 16th and continue through that week. They have pulled down the system on December 24th, 25th and the 31st due to passenger demand. This is similar to what happens on Thanksgiving Day. We have the usual reductions to the banks on Tuesdays, Wednesdays, and Saturdays. Keep this in mind if you were planning on setting a commuting schedule. This will drastically affect the traditional coverage needed days and push those days to a week earlier. The week of the 16th is where the majority of the time will be placed. There is a spike on the 2nd with a schedule change, the increase the week of the 16th, other than those spikes, the rest of the month is flat or “normal”. This change will affect the half-month logic that is in place when bidding in PBS.

December is a month where the PBS bidding system concentrates on using half-month logic when awarding trips. The system cuts the month in half and wants to award as much time in the back half of the month because of the increase in time during that period. In other words, the computer will honor your choices for the second half of the month first and then look at your choices for the first half of the month. If someone wants to evenly spread out their month with trips, December is difficult because of the half-month logic. This year should be a little different where we actually have slightly less time in the back half of the month with the spike happening on the 2nd and again the week of the 16th. Keep this in mind when bidding in PBS.

The one days were cut in numbers, down to 14%. The four-leg one days are still there with the sit times, another improvement we have yet to see. The two days were cut to 28%. When the optimizer has to break up 4 days, it cuts the trip into a 3-day and a 3-day. When we looked at where the time had been added to the month (the week of the 16th) this is where we saw the bulk of the 2- and 3-day trips. The month as a whole had a reduction to the 2 days, but they were strong during this period and anywhere there was a spike in time.

The 3-days saw the largest increase to 31%. This was because of the pressure to keep the 4-days down. The 3-days also saw high sit times and short rest periods. This seems to be the new output when time is added to the system. If you look at the increase in 4-days during the 4th of July, it was because of the added time, and they allowed the optimizer to spit out the extra time into 4-days. They did not do that in December, they kept a cap on 4-days, and the result was an increase in 3-days, not 4-days.

The 4 days have the same problems, 54% are not commutable, and there are some stinkers, and there are some gems. There are very few 3/4 days but still a few 2/3 days with long layovers in SYR, MCI, IND, CMH, DTW, MSY, BUF, MEM, SAT, SJU, ONT, SAT, CMH and BDL.

The most painful hit to reducing our hours came with the niche flying in ODANs and redeyes. The traditional trips are there but the nice increase we had in November has been erased. ODANs have been waiving this year and they added a minimum of a 6-hour break for December. The red eyes saw a reduction when they put in a 2 leg per duty period restriction. ODANs are synthetic (Rig time) in nature and when they had trouble filling trips, the ODANs would cause 2 flights to cancel simultaneously.

IPD has LHR daily with Munich starting on the 16th. The positioning trip for Munich involves a deadhead to London on the 14th, another DH to Munich on the 15th and working back on the 16th. HNL will continue to run daily and the daily turn to PUJ will go to a widebody on the 2nd.
The bidding timeline for December is scheduled as follows: 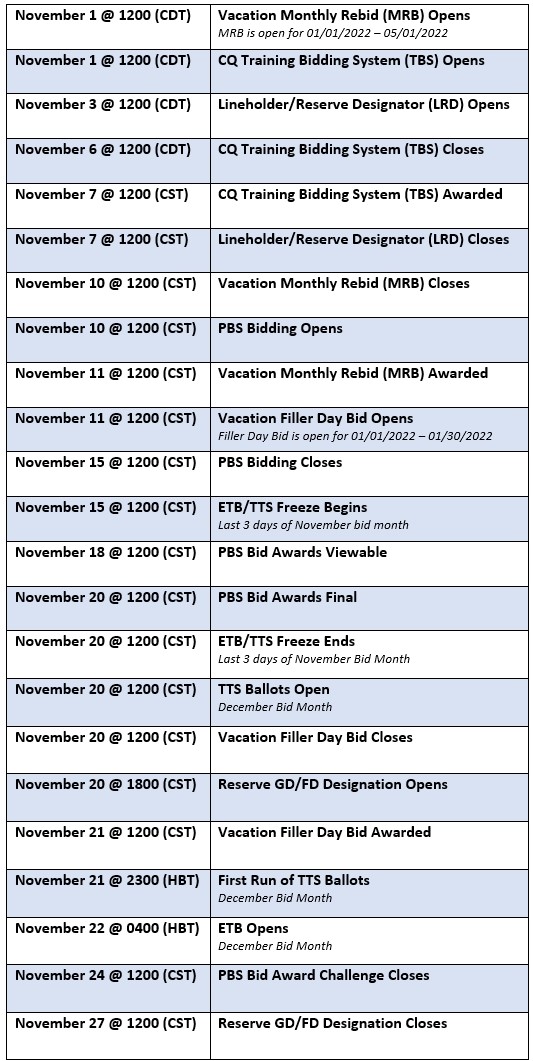 With the return of our Flight Attendants from EVLOAs, the addition of new hires and the ramping up of the entire system, this should be an exciting time as we march back to some normalcy and look forward to growing a successful airline. But like most of the decisions made during this entire crisis, it’s business as usual where all the shortcomings are blamed on the employees. Accountability is only something for the line employees with a completely different set of expectations for management. Instead of this crisis bringing us together, it has been manipulated into dividing us further from what should be common goals. It now rests with us, the employees, to change our future. The small improvements we saw in October were merely a test where the outcome was predictable even before the month began. Any improvements we get in the future will have to be fought for. I encourage all of you to take an active roll in our ongoing negotiations. Educate yourself on what is being exchanged between the company and your Union. Communicate your concerns to our negotiating committee (negotiate@APFA.org) and your Local and National leadership. You can also get involved locally with our Contract Action committee by contacting action@apfa.org.

This is a trying time for everyone, it’s a time when we need to be supporting one another not attacking each other. If you have a beef with a co-worker, we encourage the use of Professional Standards rather than engaging the formal involvement of the company. It offers the involved parties’ confidentiality and the ability to maintain control over the outcome of a conflict. In some cases, the same report sent to the company can lead to discipline up to and including termination. Take a moment to think about the situation and give Professional Standards a chance to resolve the issue. Report the problem to your local base at 704-665-7474. If you feel overwhelmed, stressed, or feel unbalanced, you’re not alone, and we can help. Call the EAP 817-540-0108 ext. 8701.

In lieu of recent events and the holidays approaching, now more than ever is the time to take care of yourselves and each other. ~ The Charlotte APFA Team