We had our monthly call with the company concerning trips for February. There were only some small changes to the way trips were constructed and the February trips look a lot like what we have been seeing for the last two months. Our active headcount is 2,374. This is almost the same active count as we had for January, and the amount of time has remained about the same with just a 2% increase. Our man-hours went from 126,553 in January to 127,665 in February. RDU will have the same amount of man-hours at 1,483.

The line average will be set at 78.3, and there will be no VLOAs.

The largest surprise here is the lower number of reserves to historical levels. All the new hires are included in this count for February as they will have a chance to bid in PBS. The company is still very cautious about what the sick rate will be following the holiday incentive. With a new variant of COVID taking hold, the company is worried that the sick rate will go back to the levels we saw in October. There are high reserve numbers for January to cover the first week and an anticipated increase in covid related sick calls. February is being planned for normal operations which is good news, but they will be watching the reserve usage and sick rate to plan for March forward. The cut-off seniority for reserve is April 2013. The influx of new-hire Flight Attendants has helped reduce the seniority for reserve and we anticipate more joining our ranks in February.

The company awarded a large amount of vacation in February, March, and April. With so many people having vacation, this will also impact the reserve numbers and the line average. For February, 310 vacation days were bought back in Charlotte as part of the monthly buyback offer. We anticipate there will be monthly buyback offered in March and April also. This should help reduce the reserve seniority in the coming months.

There is a schedule change on February 3rd for seasonal adjustments. President’s Day is on the 21st, with an increase in banks of flights on that Monday. The Superbowl is on the 13th. These are the dates to mark as CN days. Historically, this is where they have needed more Flight Attendants. We will continue to have nine banks of flights with reductions on Tuesdays, Wednesdays, and Saturdays & Sundays. The reduction of the banks typically removes the last bank (B9) on Tuesdays and Saturdays and the first bank (B1) on Wednesdays and Sundays.

IPD will have MUC, FRA, and LHR running daily. NIPD has fewer overnights due to seasonal schedule changes.

ODANs have been reduced to 4% of our trips. This is a result of the mirrored pairing initiative we have with the pilots. This initiative has been expanded to CLT, DFW, ORD, and PHX. It will now be in effect from 0900 to 2000. Pilots do not have ODANs, and the second half of an ODAN is the first flight of the day. The optimizer tries to keep the crews together starting with the first flight of the day. When it has difficulty doing this, it will try and build trips that are in line with the pilots, so it eliminates the ODAN completely. We did voice our concerns over this, and we will be looking for other ways to build ODANs that aren’t affected by the mirrored parameters.

Red-eyes took a hit being reduced to 1% of our trips. The dangerous trend we saw was the red-eye flying was being built back into the regular 3- and 4-day trips. We have always advocated that red-eye or behind-the-clock flying should be built into stand-alone trips such as traditional red-eyes, pink-eyes, and bullets. When flights are reduced due to schedule changes, it becomes hard to build these types of trips consistently. With the seasonal changes to the schedule, these niche trips usually get reduced this time of year, but it takes away from the variety and diversity in the schedule that our Flight Attendants enjoy.

We generally saw no improvements to the trip construction model. Fifty-eight percent of the four days remain non-commutable. The sit times between flights increased by 7%, and we saw a 38% increase in four leg days that become problematic when the night before is a short overnight. With the Omicron variant presenting us with yet another outbreak, doing four legs a day only increases the risk of exposure. We also asked for a service reduction to help mitigate the spread of the virus, but management has said they have no plans to reduce service or change the trip construction model. 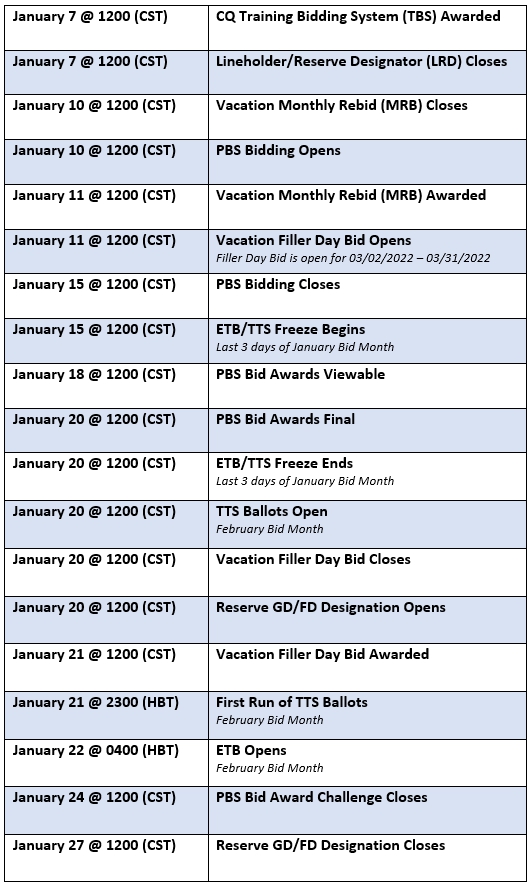 Seasonal scheduling changes are to be expected in February, but the reluctance to alter the construction model shows the company is still leery of its staffing outlook and expects to see an uptick in the absenteeism rate. In many ways, they continue to perpetuate the problems with pushing more service and contact, creating multiple leg days and the original decision to place so much vacation in the last months of the vacation year is now upon them. The Holiday Pay incentive was a success for the company and something they chose to do that didn’t just match what the competition was doing. Since early 2020, we have all had to deal with the downside of this pandemic. Furloughs, leaves, loss of flying cutbacks, reserve- it has had a major impact on just about everyone. The incentive was a good way for some of us to recoup some of the financial impacts of all this. We are well aware of the financial cost of the incentive, and the unintended consequences it will inevitably have, but it was nice to turn on the national news and see that we were leading the industry, not just following the standard.

With 2021 behind us, let’s hope 2022 will allow us to be industry leaders again, not just followers doing business as usual.