Beginning on September 21, 2015, Flight Service will add five initial Flight Attendant training classes for the remainder of this year. Two classes are scheduled to support the legacy US Airways operation and three will support the legacy American Airlines operation in time for the Holidays. Initial Operating Experience (IOE) trips will be conducted in October and November.

APFA would like to thank all Flight Attendants who have submitted screen shots and documentation to APFA regarding difficulties with Crew Portal. We would like to remind you, to assist in responding to a Flight Attendant’s question about their bid award, the Flight Attendant Resource Center (FARC) is available to provide assistance. The FARC can be reached at 480-693-8232 or 800-327-0117, option 2 followed by option 8

The final step is to send all of your documentation to crewportal@apfa.org as we gather your concerns in preparation for the recently filed Presidential Grievance on Crew Portal, ETB and PBS issues.

Flight Service Daily Operations (Daily Ops) has moved into the new Integrated Operations Center (IOC) next to the Flight Academy in Ft. Worth.

For 24/7 Flight Attendant support and assistance from home or base, or while in mid-sequence or on layover, call 682-315-7070 – or toll free at 1-888-222-4737. Daily Ops are available to support you outside local base management hours. Should you require medical attention while on a layover, need emergency travel, assistance with an AMR Event report or require a mini-manual, we are here to help. Scheduling related issues need to continue to be brought to the Crew Scheduling department.

A Flight Attendant who is scheduled for at least seven (7) consecutive vacation days may elect to place up to a total of four (4) days off BEFORE or AFTER, or SPLIT on either side of such vacation. The days off will act as a pre-planned absence and will carry NO pay or credit. Such days off will be counted toward the Reserve’s scheduled Golden Days. Such block of four (4) days, or portion thereof, may be extended into the next bid period.

In the event that you have Vacation in the first week of a bid month and you would like to have VEX days on any of the first 7 days of the month, you may want to submit your request for those VEX days in the VEX window for the preceding bid month’s VEX submission window. This will prevent you from being awarded a carry-over trip that touches a day that you wanted as a VEX day. You can still add VEX days during the normal monthly window, however once a trip is awarded you cannot use a VEX day to drop that trip.

Earlier this month the block time for three LHR sequences was reduced from what was originally published on the bidsheet.  Two sequences are at LGA involving flights 100 and 106. The third sequence is at DFW involving flight 50. Flight Attendants will be protected for the original block time of the sequences if the actual flying time does not exceed the original block time. Any necessary adjustment will be made by Pay Comp during closeout for August which takes place at the beginning of September.

Code 59, also known as Ready for Departure (RFD) delay, is an ATC delay that prohibits pushback from a gate due to ramp or airport congestion, or deicing delays. The following flow charts were created to help you understand each of the two types of delays and assist in determining which one you might qualify for.

In order to be paid properly for trading into a premium paid positions after you have checked-in for a flight, be sure to notify the Pilots of the position trade.

Here are some helpful guidelines:

The Pilots can refer to the “AOC MISC” page in the ACARS Changes bulletin. Only one position change can be entered at a time – and the position change will only cover a single flight segment. The same entry must be repeated prior to each flight leg segment.

If the aircraft is not equipped with the new ACARS software, a (manual) PE-80 Form should be submitted to Crew Pay Compensation by the Pilot.

If you did not inform the captain of the premium paid swap or ACARs failed to properly submit the swap, you will need to submit a PE-80 Form, found on Wings, to Crew Pay Compensation.

To verify that a premium position trade was completed, check Menu Option # 3 in CATCREW. Be sure to check the column to the right of the Base Column, as seen in the screenshot below. Verify the A, B, or E premium position is properly noted. 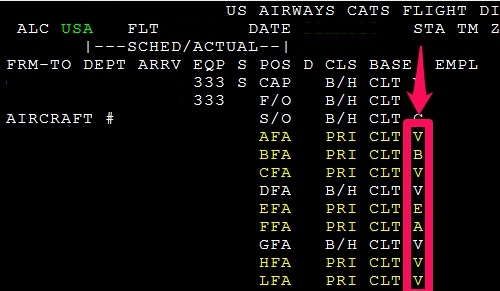 Recently, it has become necessary for Daily Scheduling to use LOD/O reserves to cover domestic pairings due to the extremely high demand for non-LOD/O reserves, especially in PHL and CLT. When this type of assignment is necessary, pay protections do exist under certain circumstances (15.G.2.f and 15.G.3). The following provides a clarification as to when and how pay protections apply:

To ensure you are properly compensated for the aforementioned pay protections please submit a claims form for processing.