Code 59, also known as Ready for Departure (RFD) delay, is an ATC delay that prohibits pushback from a gate due to ramp or airport congestion, or deicing delays. The following flow charts were created to help you understand each of the two types of delays and assist in determining which one you might qualify for.

Please Note: If Screen 5 of CATCREW does not reflect the correct Code 59 block time after completion of the pairing, please submit a Direct Connect – Pay Claims Form.

Position Selection continues to be governed by the language in the 2013 Red Book Contract in Section 10, pages 10-51 through 10-53. A Flight Attendant who has been awarded her/his position through her/his PBS award is entitled to keep that position and cannot be displaced by a more senior Flight Attendant.

Flight Attendants on CLT, DCA, or PHL base pairings who are awarded a position outside of PBS in ISAP, ISAP/AIL, ETB, Reserve Assignment or swaps are considered “placeholders” on the Pairing. Actual Position Selection will be determined by seniority (or mutual consent) during the briefing prior to the origination of the Pairing per the Contract.

As an exception to the above, Flight Attendants on PHX base pairings may not be displaced from her/his awarded or assigned position on her/his pairing regardless of how she/he acquired the position (e.g. PBS, ISAP, ISAP/AIL Reserve Assignment or swaps). This language can be found in the 2013 Red Book in Section 10, page 10-53.

At FOI, the following language from the 2014 JCBA will be in effect:

Here is an example of how to calculate projection time on a Domestic/NTI pairing:

The FA has already operated a flight from PHX to SJC, and is scheduled to operate SJC to PHX and then PHX to TPA. A delay is encountered in SJC.

The FA adds 15:15 to the original report time of 08:50, which equals 24:05, the time in which the FA must be released by in TPA to not exceed actual duty limitations.

Please refer to the chart on Page 11-4 of the 2013 Red Book of the contract to determine what the length of your duty day must be in order to exceed your duty limitations. Please keep in mind that your maximum duty limits vary, depending on your report time (home domicile) for the day.

ODAN duty periods shall be scheduled for a maximum of fourteen (14) hours of duty, however, the Flight Attendant may be required to remain on duty up to fifteen (15) hours to complete an ODAN pairing. 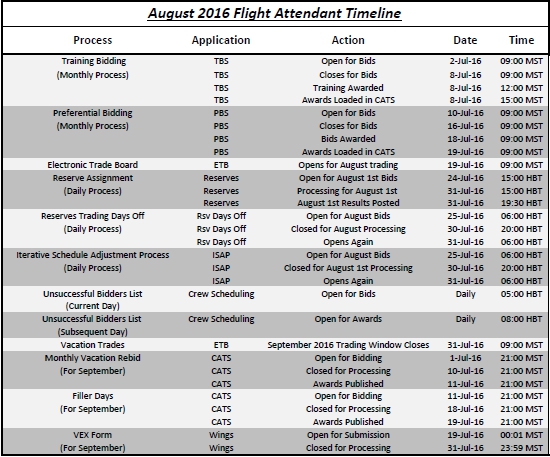 Flight Attendants will receive $25 training pay for the completion of the module.

To access the WBT module, Click Here or click on the Learning shortcut under ‘Find it Fast’ on Jetnet. From there, select Visit Learning Hub. This required training will be listed in your ‘To Do’ list. Click on the Register and then Start button to launch the lesson.

The following Contractual provisions are in place for LUS Flight Attendants in the event a pay shortage should occur: