Updates from the Scheduling Department

We want to clarify information put out in a recent communication from the Company. We have discussed this with the Company, and they will be putting out a correction to their communication.  The Union was not in agreement with some of the liberties the Company had taken with our contract language. JCBA 10.V.5 explains who and how first-party contact can be made:

When being rescheduled mid-sequence, the contract states you must remain contactable for 3 hours after the disruption is known.

JCBA 10.J.4.a a. Subject to the provisions of Paragraph J.1, once a Flight Attendant crew has originated a sequence, the Company may reschedule such crew to maintain schedule or substitute another crew on a part of the sequence to maintain scheduled operations in accordance with published timetables. Such rescheduled crews will be advised of their remaining duty assignment for that day and for the balance of the sequence within three (3) hours after the disruption is known. If not assigned replacement flying within the window above, the Flight Attendant shall be released for that duty day.

You may choose to call Crew Tracking, but you are not required. You are required to answer or return their call if they call you within the 3 hours after the disruption.

We have received many calls and emails about the inaccuracies of the Daily Callout Reports and the hardship they are creating for the Reserve Flight Attendants in trying to determine when they are next for an assignment. We have been pushing to get these corrected much faster; however, it has taken longer than expected. We have been asking for the Company to send out a communication explaining to the Flight Attendants to be aware of the inaccuracies, what is causing it, and how the system is making the assignments. Their communication is taking longer than anticipated, and we have been addressing that with the Company as well.

The fix to the reports is estimated to be released the last week of July.  We have been advised some of the enhancements to the Callout Reports we have been requesting since August 2018 are also set to be released in this programming update.

ROTD shows a static “snapshot” list (not real-time) to the FAs. This “snapshot” has been this way since AUG2018. In late April/early May there was a new problem of the lists becoming even more unbearable, and now Reserves who were unavailable were showing on this static list who were unavailable such as Reserves who were out sick, had been given an assignment off SB, on rest, legalities due to actual operations, etc.  We think this had something to do with when they started to sunset TARS (background system to FOS) it made the static list not refresh every time ROTD ran. Meaning after the first ROTD snapshot was taken in subsequent rounds it wouldn’t refresh the callout report and reflect these Reserves as unavailable making it seem as if the junior FA next to be called was being skipped. We are still trying to confirm if it was indeed the sunsetting of TARS that drove this new issue.

We did confirm with the Company that the programming ROTD uses to assign/award Reserves is accurately doing so in the correct order. The ROTD callout report is remaining static; however, the ROTD programming is pulling information from real-time and assigning correctly.

Crew Comp has advised APFA they have worked through all the LOA pay protections for the OASIS/MAX/VENEZUELA. This includes the Flight Attendants who fell under the category of “no results.” They are currently running an audit to make sure they captured all that needed to be paid. APFA has a spreadsheet we are working through with Crew Comp of cases that needed further review. This lists consists of roughly 250 Flight Attendants. Your base representatives have sent us their open cases as well to be added to this spreadsheet.

If you feel you are stilled owed pay protection, please fill out a System Issues Report under the tab labeled – 737 MAX TTS/UBL ballot “no results” screenshot. This will help direct your open issue to one location for easy tracking. Even if you did not fall under the “no results” group, please use this form anyway. Also, upload any/all screenshots you have to help assist us with the research.

Every month around the 10th, FOS depopulates the previous month Activity Sheet (also referred to as a HI1/HI2) and populates the next month’s Activity Sheet (minus bidding results until PBS results are final). From the last day of the current month until the 10th Crew Comp processes open pay issues on a Flight Attendants previous Activity Sheet. FOS only stores two months at a time.

One main part of closeout is to pay for canceled legs that are pay protected. Most other pay protections are captured throughout the month except for canceled legs. At closeout, Crew Comp runs a program to capture any Flight Attendants who are still owed pay protection due to canceled legs from the previous month. This is due to how FOS is currently programmed and is estimated to be corrected sometime this year.

Please remember to read the entire message in the Direct Connect response if you have submitted a claim. The Direct Connect Form/program is an outdated system, and it causes a lot of confusion. What may seem like a denial the actual message is actually telling you something different. The claim table and form auto-generates some of the following responses regardless based upon if Crew Comp made any changes to your hours/pay at the time of the response:

These can be misleading because the actual message is telling the Flight Attendant they will see changes at closeout usually.

You had a partial cancellation of a 10hr two (2) day sequence on 15JUN and were removed from the sequence as an XR. Your sequence had Crew Substitution so you will be pay protected the originally scheduled sequence at the time of award onto your schedule. Currently, you are seeing only 5.33 hours reflected on your HI1, and you send a Direct Connect asking for the remaining 4.27hrs on the 20JUN. Your Direct Connect will say one of the responses above; however, the actual message will be telling you if any hours are owed you will see them at closeout. 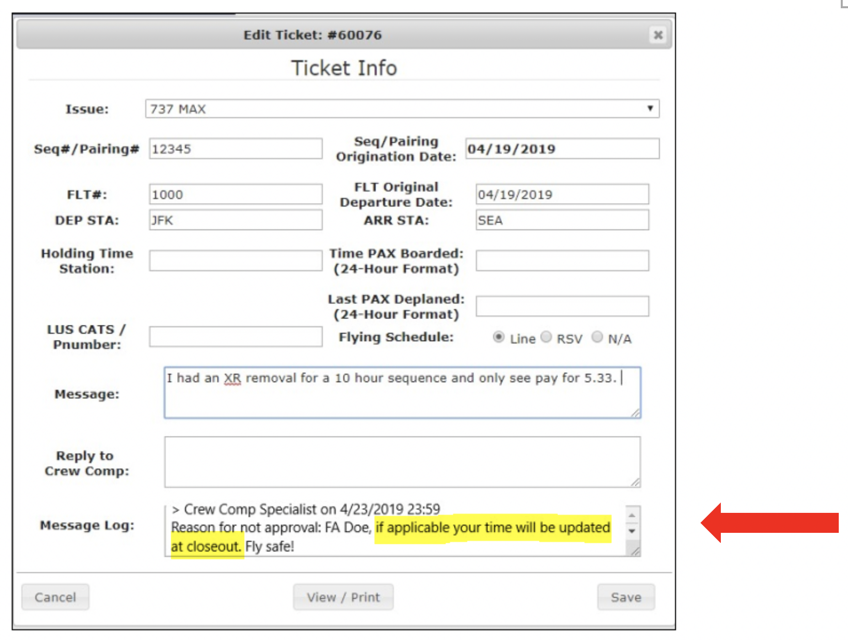 Posted in Hotlines - 2019 and tagged Scheduling