During PBS processing for the January 2020 awards, the holiday logic has been utilized for both lineholders and reserves when covering January 1st. What this means is that if January 1st becomes a CN day it will be weighted as more important than other CN days. Because this holiday is on the first day of the month, the results may look different than if the holiday was in the middle of the month. There are a number of factors that impact the award of trips at the beginning of the month. A Flight Attendant who is junior to you may have the 1st day off, not because the holiday logic failed, but because of the flying and/or reserve days in the previous month. While it may seem each month exists in a vacuum, a number of factors must be taken into account when awarding trips or reserve on/off days.

Factors that could impact an award:

Did the Flight Attendant have scheduled flying (at the time of PBS processing) the last 4 or more days of the month? If they are on reserve in January, they would not be legal to have the minimum 3 days of reserve starting January 1st but would be forced to have the beginning of the month off.

Did the Lineholder have scheduled flying at the end of the month?  As a lineholder in January, they could be awarded/assigned a trip at the beginning of the month but it would depend on the legalities of the previous month in conjunction with the legalities of available trips on those dates when PBS reaches your seniority. 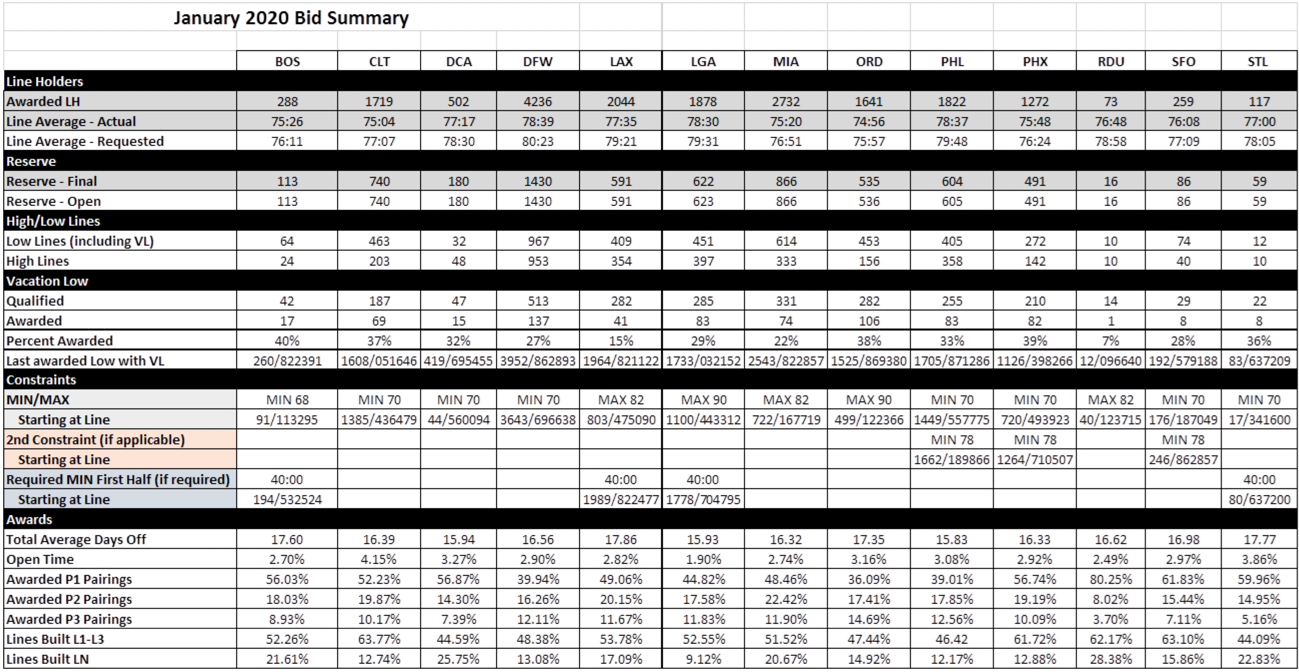 Here are a few definitions for some of the key terms to help you better understand the award summary chart above:

Line Average (Actual and Requested)
The average credit hours projected for lines of flying in a particular bid month. This value is determined by manpower planning for each base and is set base in PBS prior to the bid run. It is displayed on the message board of your dashboard tab. After the PBS run the actual time is displayed in the summary.

Reserve (Final and Open)
Open displays how many reserves were anticipated for the month. Final is the actual number of reserves.

High / Low Lines
Amount of hours that were awarded below 70 hrs and above 90 hours.

Vacation Low
Flight Attendants who had at least 7 days of vacation, who are eligible to bid low (40-69 hrs) and were given priority for a low credit line.
Last awarded low with VL (vacation low) lists the line and employee number.

Constraints: Min/ Max
Min displays the line # / and employee # of the Flight Attendant whose seniority and below was awarded above the minimum stated hours.

Max displays the line #/ employee # of the Flight Attendant whose seniority and below was not awarded above the stated number of hours.

Allowed Max First Half displays the line #/employee # of the Flight Attendant whose seniority and below was constrained to the stated number of hours in the first half of the month.

For procedures that apply once a mis-award has been confirmed, you may view a sample letter you will receive from the FABRC here.