Beginning with the August bid month, there will be a change on how a block of Reserve days at the end of the month can be bid and awarded/assigned. This adjustment will have a test period from August 2020 until May 2021. If this test proves to be beneficial for Flight Attendants, it will remain in effect until it can be incorporated into the next contract. In this hotline, you are provided examples of possible patterns. It is important to note that not all possible patterns are listed below.

Beginning in the August bid month, a Flight Attendant will be able to bid and be awarded/assigned one (1) or two (2) day(s) of Reserve at the end of the month. This will allow the Flight Attendant more flexibility and offer a greater variety of Reserve patterns and greater flexibility when Reserve Coverage Needed (CN) Days come into play.

With the new logic, a Flight Attendant has the ability to bid and be awarded more than 3 days o flying at the beginning of the month.

Rather than having to bid and be awarded/assigned a minimum of 3 days at the end of the month, followed by either another block of 3 days at the beginning of the month or days off, the allowable pattern of three (3) to six (6) days of reserve can be accomplished across the two months. 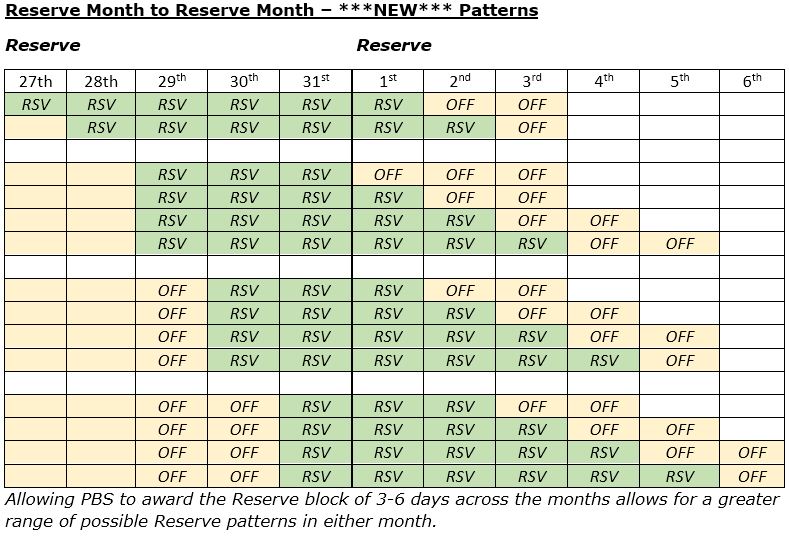 Allowing PBS to award the Reserve block of 3-6 days across the months allows for a greater range of possible Reserve patterns in either month.